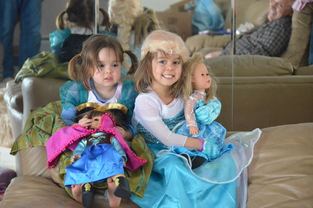 There is an ever increasing parenting style in the U.S. that I’m going to label the “parent friend.” More and more kids and parents are BFFs than ever before. Personally, I feel this is a problem.
I’ve been teaching for 12 years and just when I think I’ve seen it all, I get surprised once again. I teach in a high school and every day I see parents bringing in lunch money/lunches, sports gear, homework, instruments, and even cups of coffee. I hear more parents being referred to by their first names by their own children and have witnessed more disrespect than ever before. A lot of people tell me, “Oh just wait till your kids are in high school”. Okay, maybe. My oldest is five and my youngest just turned three. True, they are young still, but I am making a conscious effort to do everything in my ability to foster responsible, conscientious and kind human beings. For their own good. And mine. After all, I love them but don’t want them, their spouses, children and pets living with me and playing video games on my couch when they’re 40!
Today, if a kid says they are afraid of their parents everybody jumps to the conclusion that there is an abusive relationship going on. What happened to having a “healthy fear” of your parents? If you did something wrong, you were actually worried your parents would find out and try to correct the behavior. It’s not like as a kid, I had welts or bruises on me. I received a slap on the butt now and again or even a simple timeout and yes, that did the trick. My pride may have suffered temporarily but I learned to behave. Did I still love my parents? Absolutely…and I also respected them. Still do.

3 -year-old doesn’t pick up their toy’s. “That’s o.k. I’ll pick them up for you. Next time though you need to help mommy, would that be o.k. with you peachy pie?”

4- year-old has a tantrum in the store because they want candy. Dad quickly buys the candy and gives it to them to eat immediately.

5- year-old at his younger siblings birthday party gets presents as well because the parents don’t want them to feel bad that it isn’t their birthday.

8-year-old- “I don’t like this meal. Casseroles are disgusting”. Parent “O.k. what would you like me to make for you? Mac & Cheese or a hot dog?”

Father goes to his 12-year-old son’s basketball game and afterwards says. “Son you need to shoot more and pass less. You’re so much better than everyone else.”

13-year-old son forgot his homework and texts mom- Mom leaves work and goes home and drops it off at school.

14-year-old- to mom “I have to sell candy bars for the volleyball team.” Moms response. “Don’t worry honey. I’ll take them to work and sell them for you.”

15-year-old- “I don’t understand my math homework! Well it’s because your math teacher isn’t teaching you properly. Here give me the pencil let me do it for you.”

A father can’t even watch a football game with 16-year-old son because he’s on the phone the entire time texting.

17-year-old daughter- Mom I want more guy’s to like me. –Mom pays for cosmetic surgery.

16-year-old shows up wasted to school dance. Parents are mad at the district, not their child. They worry something permanent will go on record and hurt their chances at college.

Parents to 18-year-old “Do you want to have a party at the house? Mom and I are going away over the weekend. Just make sure nobody drives themselves home.”

Parents are increasingly calling college professors to discuss grades.
Some of you are thinking…Yeah I’ve done some of these but I’m not doing them because I want to be their friend. That may be true. Sometimes we do them simply because it’s the easier thing to do. However any of these lowers your authority and you start lowering yourself to the same level as your kid.

I am not by any means a parenting expect. Nor the perfect parent. I’ve made plenty of mistakes. I just wonder how this new parenting philosophy that empowers kids is not going to have a negative effect on our society. Why is it that more student’s are dropping out of college? The U.S. suicide rates among teens is astoundingly high. Is it because kids just aren’t able to handle anything on their own anymore? Too many parents swoop down and solve their problems for them. I am by no means claiming that it is as simple as a different parent raising ideology but I feel that it is part of the problem.

How about you? What parenting mistakes have you made or witnessed? We’re all on the same journey.
this post is linked with running with spoons.

Did you read my last post? The best thing you can you give your loved one?

Previous Post: « The greatest gift you can give this Valentine’s Day
Next Post: Using wood ash in your garden and lawn »