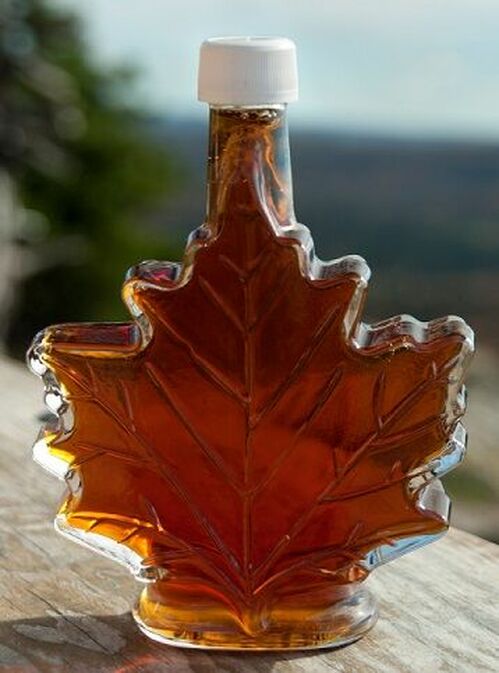 Guess what the first crop is for us gardeners? If you guessed peas, lettuce, kale or spinach, you’d be wrong.
It’s Maple syrup!
Not that fake, phony stuff that comes in plastic bottles from the grocery store. We’re talking about the real deal here, folks!
We’ve become a Maple tapping family. Yep. And it’s fun!
But I was hesitant to write the post myself on Maple tapping as we’re first timers. I’m certainly not the expert.
So I reached out to Julie Fryer from Maple Tapper to lend us her insights and experience. I mean, “she wrote the book” on Maple tapping. No, that wasn’t a sick joke, she really did.
It’s called “Guide to Maple Tapping” and I honestly read it in one sitting when I should have been making dinner. Oh well.
And she’s guiding us today with her wealth of knowledge on Maple tapping! Ready. Set. Tap! 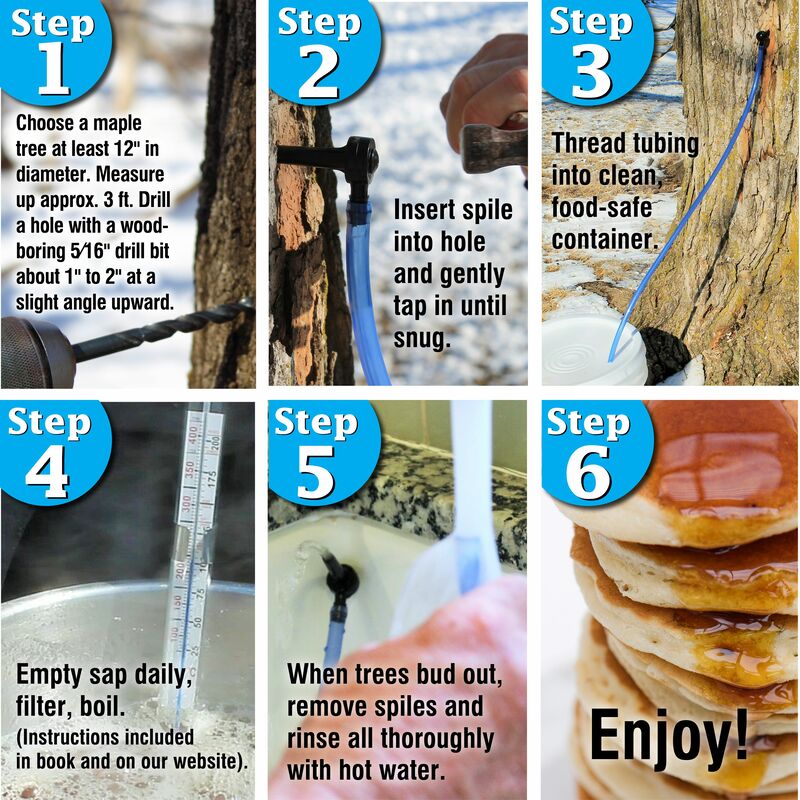 Tapping Maple Trees: How To Make Your Own Maple Syrup.

It’s maple syrup season! Have you ever considered taking up this fun hobby but wonder how it all really works?

Sugarmaking (yeah, you get to call yourself a sugarmaker!) is so much easier than you think. If you can run a drill and boil water, you have the skills!

Your kids will love it, everyone has to go outside and get off the couch, and your reward is be one of nature’s sweetest treats: pure maple syrup.

​This short article will walk you through the process but lots more info is available the sugarmaking pros.

Let’s start with common questions and a little primer on the tapping process.​ 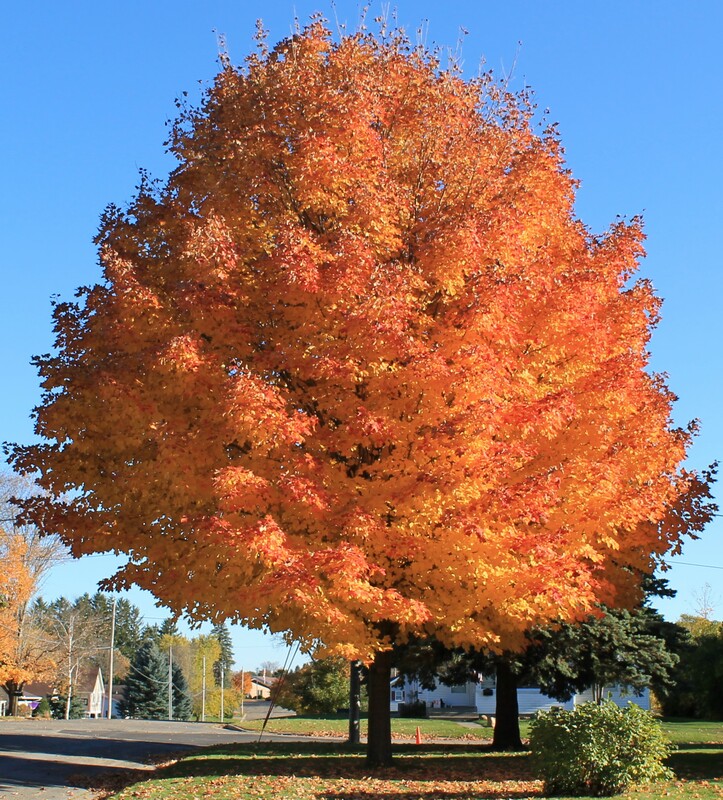 What Kind of Trees Can I Tap?

The best maple syrup comes from sugar maple or hard maple trees because their sap has the highest sugar content.

You can also tap soft maples, box elder, birch, or even black walnut but the end product will taste a bit different and the boiling process takes a little bit longer.

​The tree must be healthy with no large dead branches and a full canopy of leaves in the summer. The tree’s size determines how many spiles (aka taps) to use and most sugarmakers follow this rule: 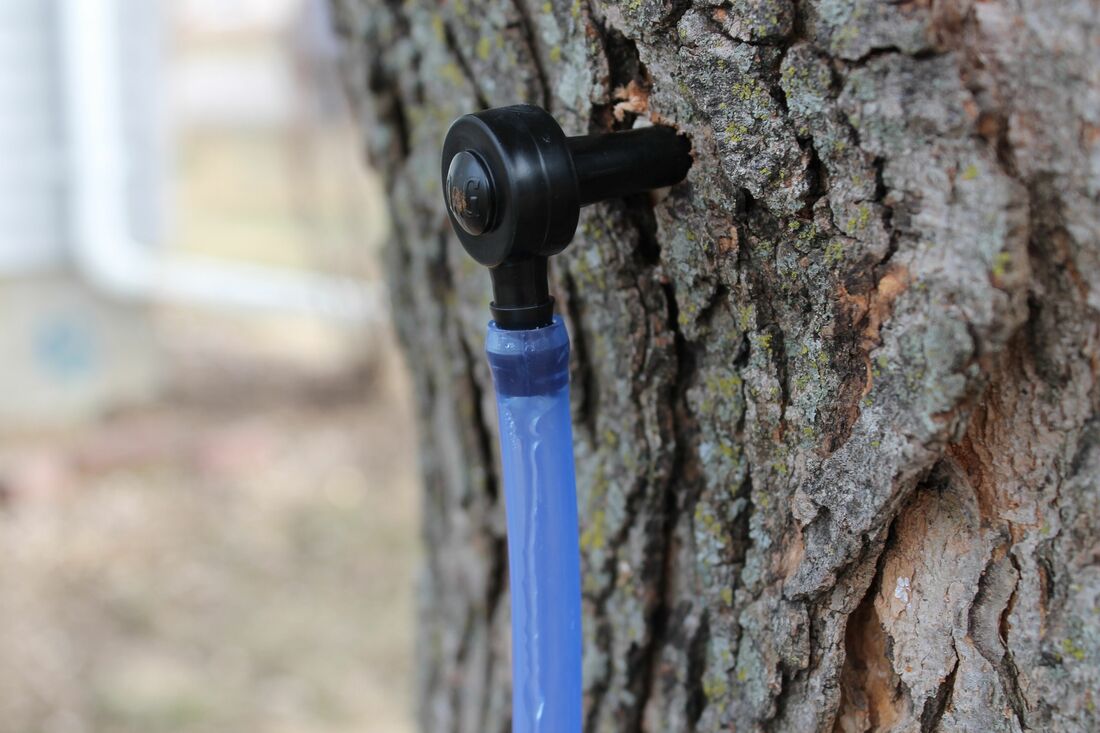 Does Tapping Hurt the Tree?

If the tree is healthy when tapped and proper tapping procedures are followed, the taphole will start healing within a few weeks after the spile is removed.

Each taphole, however, must be placed in a different spot on the tree from the previous year.

​One thing to note: the bottom 4- to 6-foot “tapping zone” will result in trees that are less valuable if cut down for lumber.

When is Tapping Season?

The sap run typically begins in late February and lasts through mid-April or until the trees bud out.

This date depends on where you live but the run is always triggered by the same conditions: below-freezing temperatures at night followed by daytime temperatures in the 40°F range.

​So, if you live in a zone with this seasonal freeze/thaw cycle, you can become a sugarmaker! 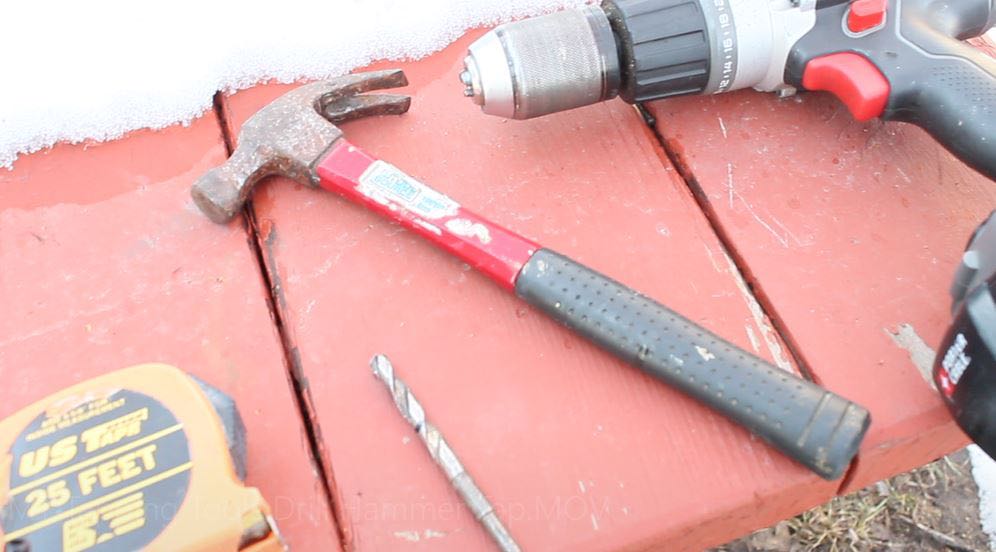 What Tools do I Need?

You need just a few basic supplies to start (most of which you probably already have): 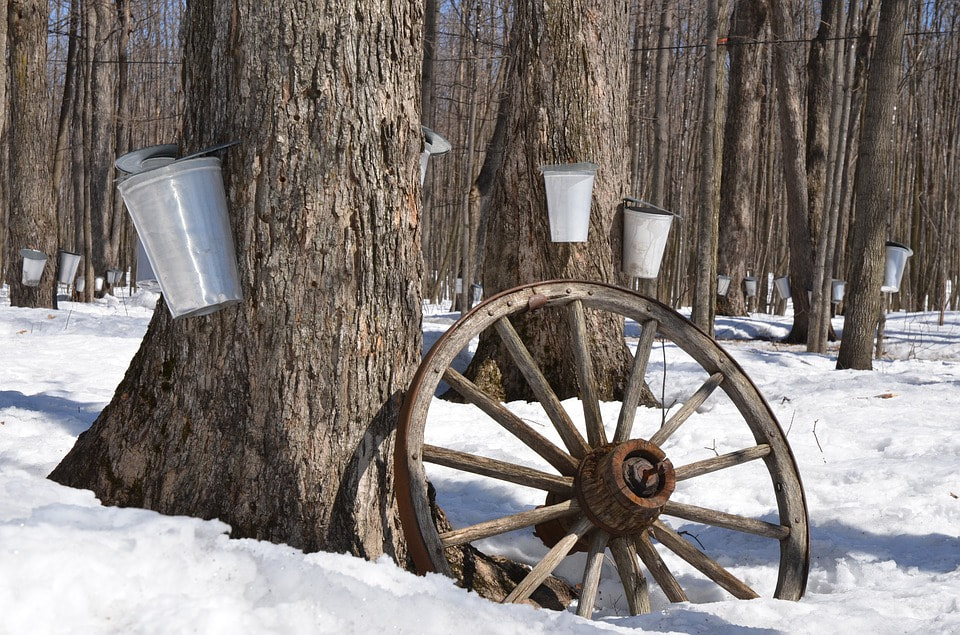 How Much Syrup Will I Get?

​Most tapholes will produce 10 to 12 gallons of sap in a season which will boil down into approximately one quart of syrup.

If you tapped four trees, you’d get approximately one gallon of syrup. Now you know why it’s so expensive at the market!

Once you’ve found a tree and waited for the sap run, this step is super-fast:

Step 1: Mark your drill bit with tape or a marker at 1½” from the end. This is how deep you’ll drill into the tree.

Step 2: Drill the hole 2- to 4-feet off the ground and make sure the tubing will reach your bucket!

Also, if the tree has been tapped before, locate your new taphole no closer than 12” above or below an old mark or 6” from side to side.

Step 3: Drill steadily at a slightly upwards angle into the tree, stopping when you hit the mark on your drill bit.

Be careful not to wobble the drill and as you remove the drill, try to pull with it the debris left in the hole. Sap will most likely begin running as soon as you drill the hole.

Step 4: Insert the spile into the hole and gently tap until the hammer begins to bounce back.

Step 5: Attach your collection container and pat yourself on the back! 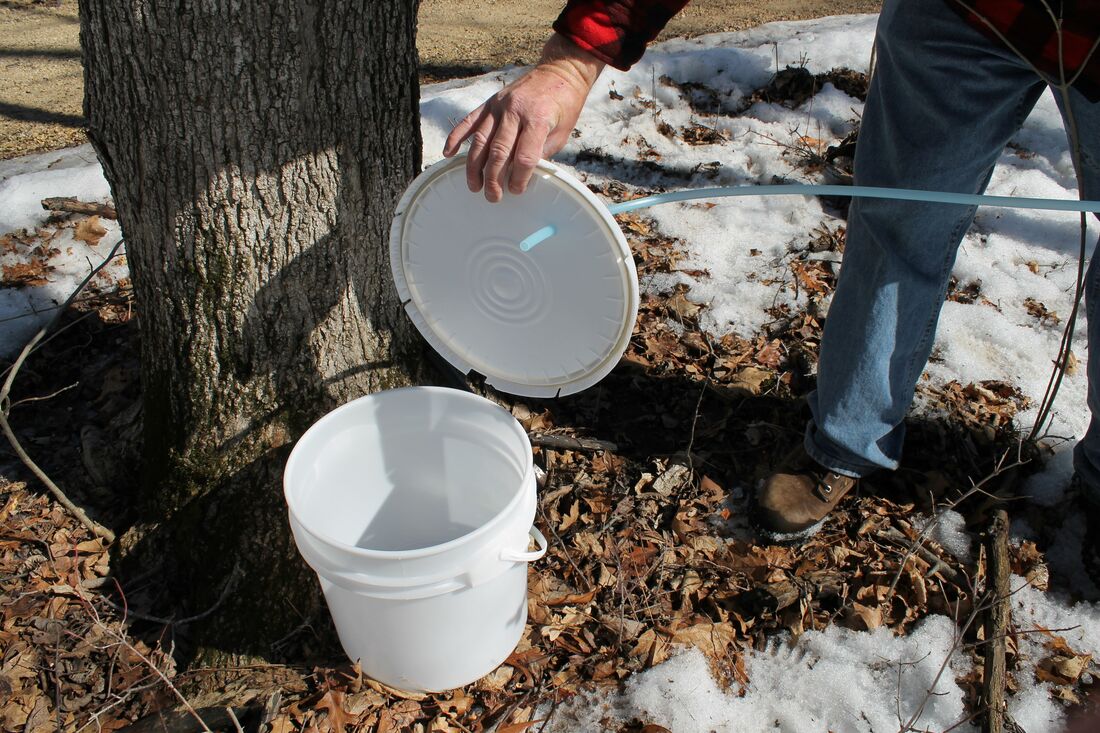 Now we let nature do the work! Check your buckets daily and, if possible, empty them through a thin prefilter to remove any debris.

Sap should be handled like milk – store as cold as possible, out of sunshine, and cook as soon as you’re able.

Sap can be stored for a few days but bacteria will grow in this sweet water and eat away at your sugars.

Don’t worry, the boiling process will kill the bacteria but your sugar content will be reduced which lengthens the evaporation time.

The amount of sap you collect each day will again be affected by the temperature. On a really warm day, your buckets may fill to the top but on colder days, you may get just a few ounces.

This is normal and don’t be worried if it seems like nothing is happening. Your spiles can stay in place all season long to catch sap whenever it decides to run. 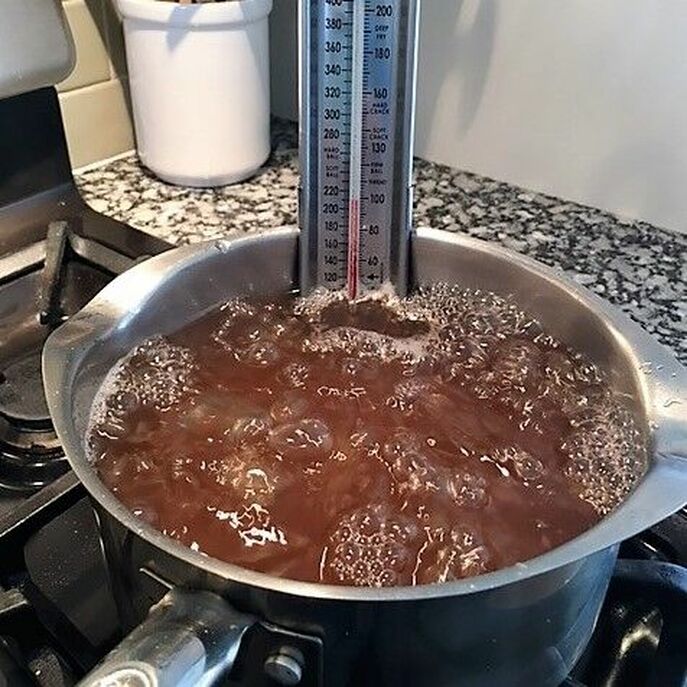 Throughout this process, you’ll be relying on your thermometer to tell you when to move onto the next stage.

If your readings are even a couple degrees off, you’ll make candy instead of syrup! Make sure your thermometer is working perfectly by calibrating it before each day’s boil.

Pure maple syrup is made by evaporating the water off and caramelizing the sugars through a long and steady boil.

The goal of this entire cooking process is to heat the sap to 219°F (or 7°F above water’s boiling point).

It can take many hours to get to this point but be warned that the last few degrees go quickly so pay attention at Stage 3! 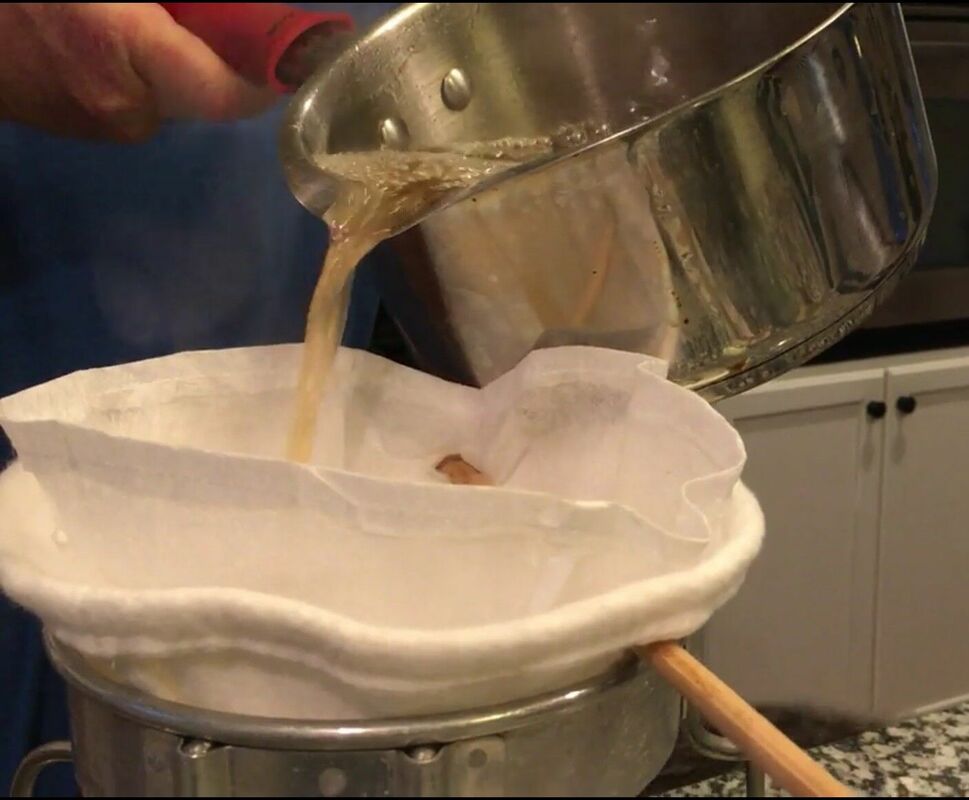 Fill your pan with filtered sap, leaving at least 3” of head space for the boil. Cook over high heat until you get a gentle rolling boil and then reduce heat enough to keep this boil going.

Sometimes sap will get foamy during boiling – to remove this drop in a ½ teaspoon of butter, a few drops of vegetable oil or sap defoamer. These will not affect the taste.

If you were unable to fit all your sap into one pan, preheat the extra sap in smaller pans before adding it in.

As the sap in the largest pan reduces, continue adding prewarmed sap until it’s all boiling in one big batch. Do not add cold sap to this evaporator pan as that will “kill” the boil.

This boil will take a few hours. As the color turns darker, check the temperature. Once it gets near 216°F, it’s time to move on to the next stage.

Once sap reaches this range, filter through the thinner filter, transfer it into a smaller finishing pot, and boil over a more controllable heat source such as your kitchen stove.

Leave a few inches of headspace in this pot, too, as it can once again foam up or boil over. Continue cooking at a rolling boil.

Important! Watch your temperature closely from here on! At 219°F sap is officially syrup and beyond that it quickly becomes candy!

Watch for telltale clues that you’re nearing this goal: the sap gets thicker, the surface takes on an oily appearance, the surface develops a foamy layer, and the bubbles get smaller and closer together.

Once you reach 219°F, remove syrup from the heat and cover it to keep the heat in. Prior to bottling, professional sugarmakers also use a tool called a hydrometer to measure the density of the syrup.

This is not necessary at the hobbyist level and only needed to establish the grade if you’re selling your finished product. 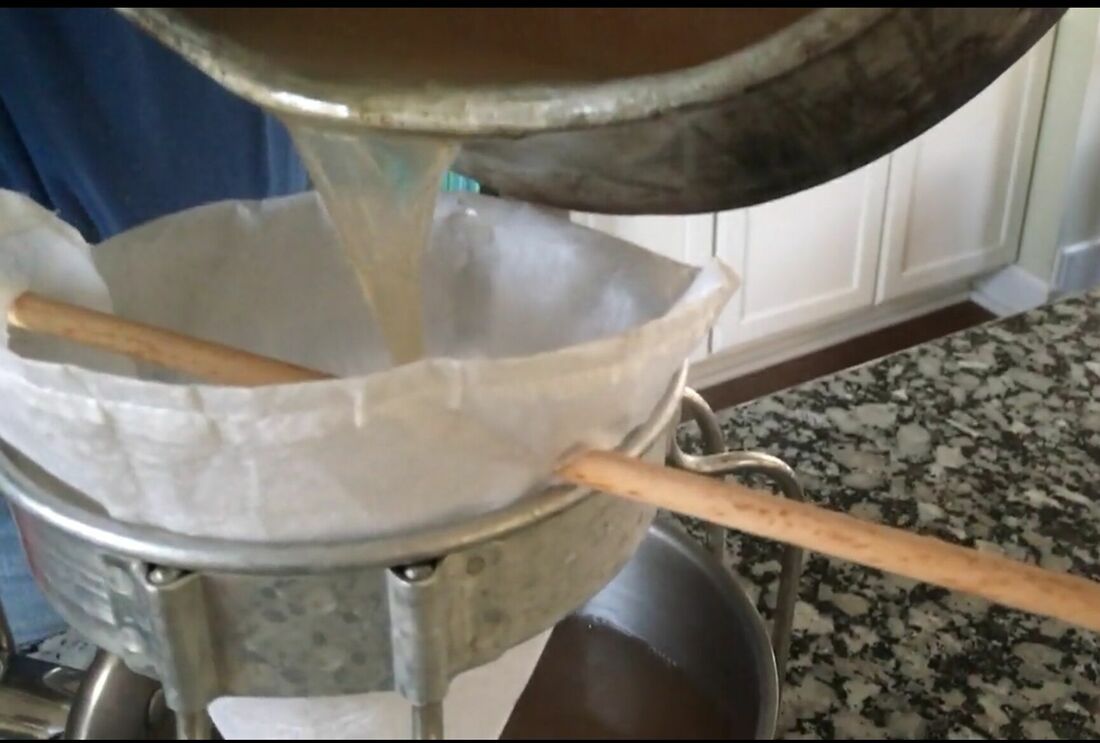 One final step and you’ll be done! Now you’ll use two filters – the thin prefilter nestled inside the thicker finishing filter.

Be sure to follow standard canning practices – sanitized jars with no chips on the rims and regular lids and rings for sealing.

Have your jars lined up and ready to fill as this part goes quickly. Remember syrup is HOT so handle with care.

Just pour the syrup through the two-stage filter into jars. Fill jars to within ¼” of the rim, wipe the rims, and seal with lids and rings.

Tip the jar over to flood the seal then lay on their sides for 24 hours. You may notice that your once-full jars have a bit of headroom – this is normal as the syrup shrinks a bit as it cools. Syrup will keep indefinitely in jars but once opened should be refrigerated.

After each batch, rinse everything (including filters) with hot water but do not use dish soap or laundry detergent which can leave residue that affects flavor. 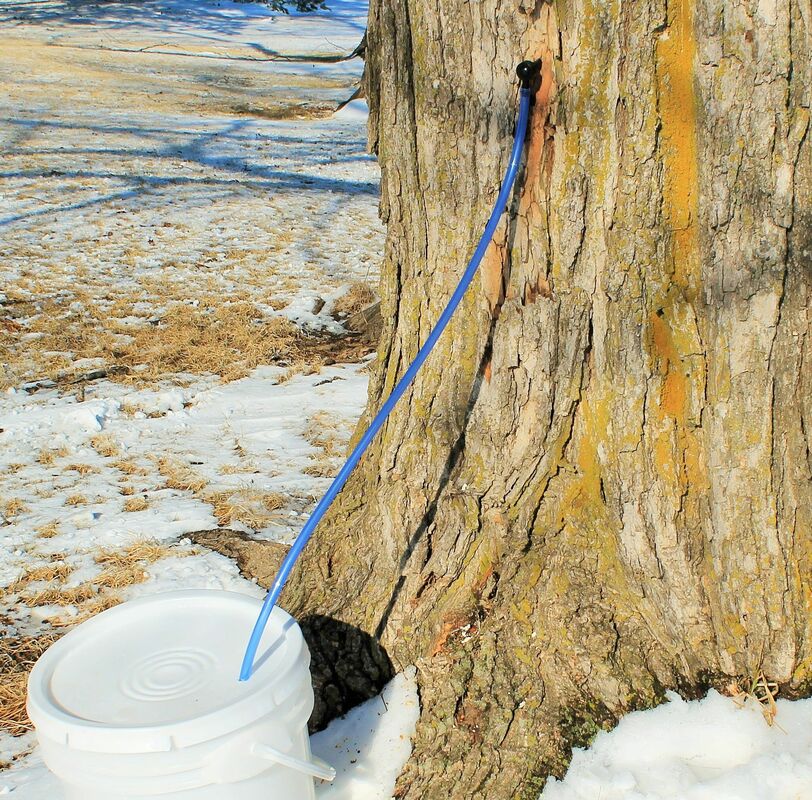 When Does the Season End?

The season is over when either: you have enough syrup (our first choice!); the sap flow slows way down; or the trees bud out.

The latter is the absolute end as the budding process negatively affects the sap’s flavor.

To remove the spiles, gently pry them out with a hammer and that is all you have to do. The tree will naturally heal itself within a few months.

Just rinse tapping equipment with hot water, dry thoroughly and store away for next year 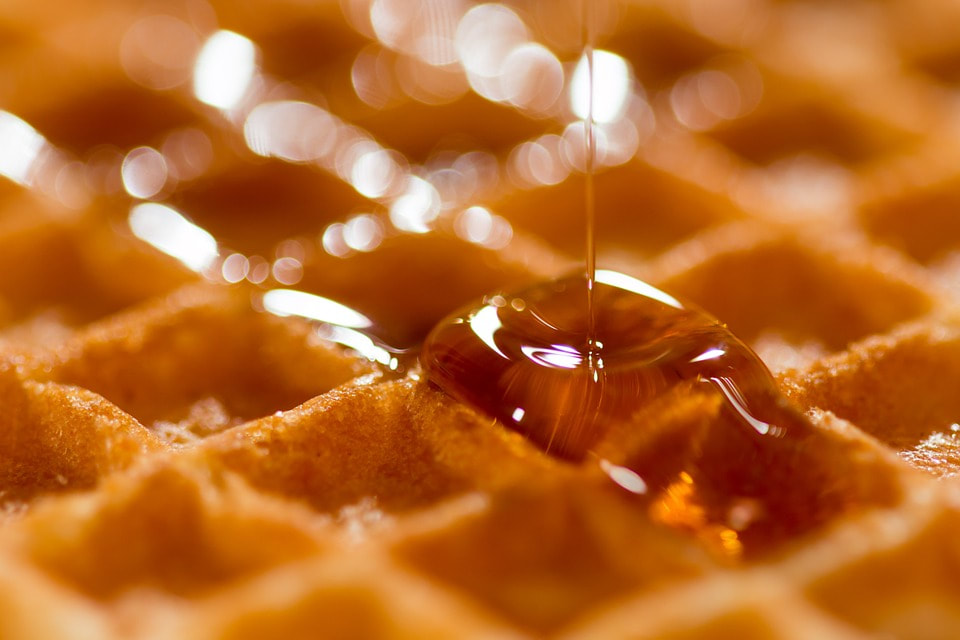 How to Use Maple Syrup

Pure maple syrup is a great replacement for refined sugar and has much more nutritional value.

Try it on cereal, oatmeal, with yogurt, in your tea, or wherever else you’d use sugar. In recipes, ¾ cup of syrup replaces one cup of sugar (or ¾ of a teaspoon equals one teaspoon of sugar).

Maple syrup in jars will keep indefinitely but once opened should be refrigerated.

​Syrup will sometimes be cloudy or have sediment in it (this is natural and edible). If, however, your syrup has an off flavor, smell, or color do not use it. 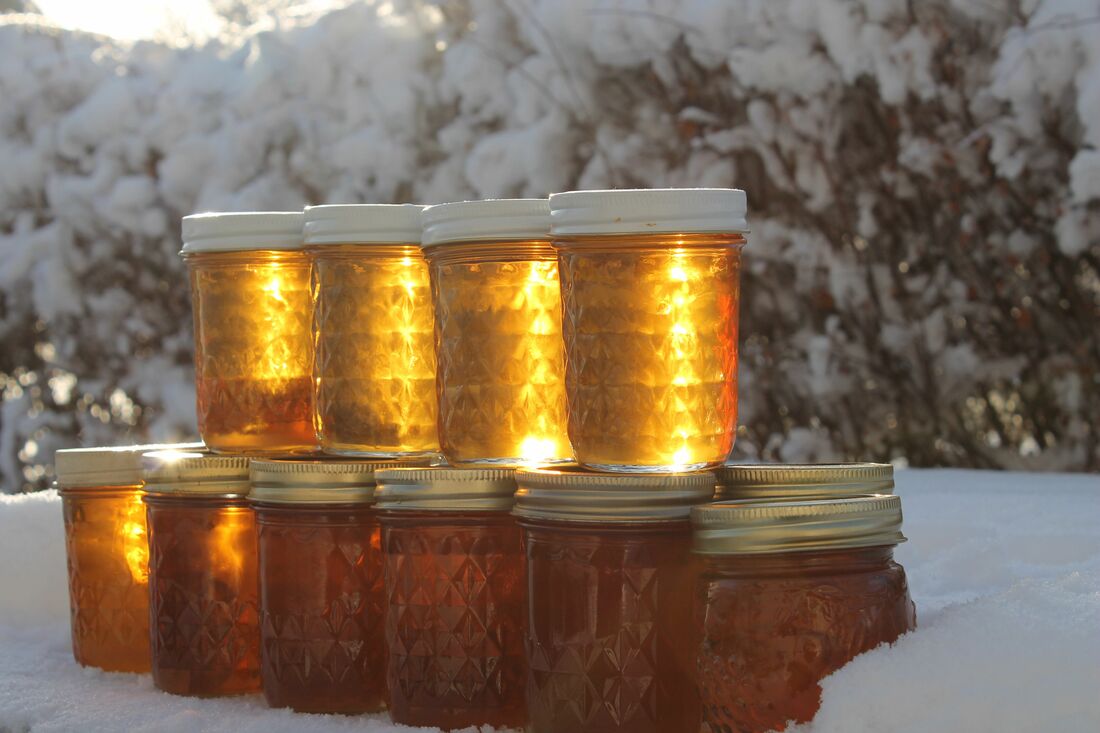 Julie lives in Minnesota where she taps trees every year, grows a big flower and veggie garden, fishes local trout streams, and sneaks off to the campground or the North Shore whenever possible. She works closely with Maple Tapper to help grow the hobby of sugarmaking. To learn more about sugarmaking, visit www.mapletapper.com or contact julie at julie@mapletapper.com.

To purchase the equipment mentioned in this article, visit these links:

A Guide to Maple Tapping