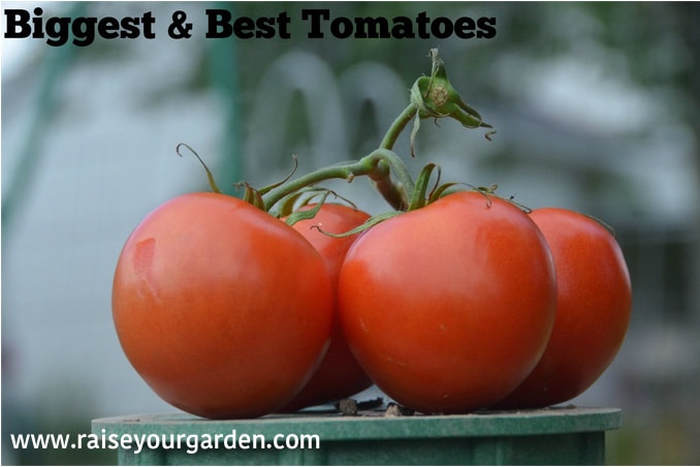 You probably know by now that Tom is a gym teacher. So bigger is better. And this mantra even applies to tomatoes.
Tom wants the biggest tomatoes on the block. Nothing else will do.
I’m not sure who he thinks he’s competing with since very few people actually grow anything in our suburban neighborhood. Certainly not to the extent that we do!
He’s a Pinterest man.
And he’s coming up with all sorts of ideas to implement.
One of which are these dang fish heads. Gross. I know.
But it’s an organic fertilizer and tomatoes are heavy feeders that need lots of fertilizer.
He’s been reading about how fish heads (all leftover fish parts actually) paired with aspirin and a few other amendments will grow the most stupendous tomatoes ever.
He also used some leftover PVC tubing from a drain project to make these unique watering tubes that feed our tomatoes using compost.
Combining these techniques will grow the biggest and best tomatoes possible. The techniques outlined here will work with all types of tomatoes. If you want to grow the sweetest and tastiest cherry tomatoes, you will find this post quite helpful!

We hope you’re game and keep your sense of humor while following us! 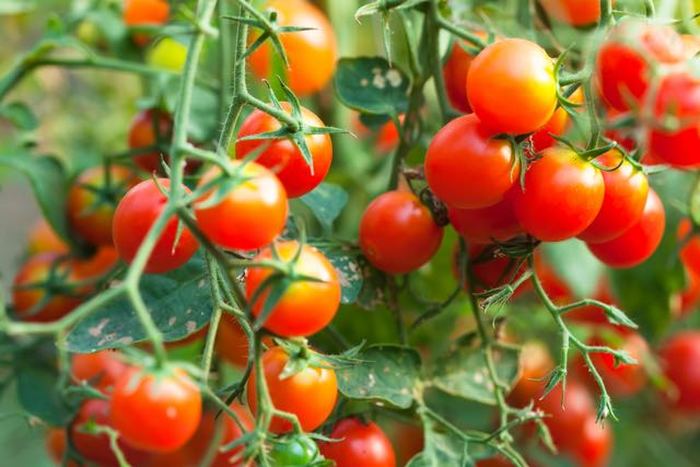 Tom dug out a trench. But you could just dig humongous holes. The general idea is to use one PVC water tube per four tomato plants that will be staggered around each pole.
We are using three poles and twelve tomato plants for this plot measuring six feet across. Encouraging upward growth is vital to save garden space. Tom made these for me out of PVC!
No time to make your own DIY PVC cage? I also have these ones and they work.
The tubes will have holes for proper drainage and will function much like a DIY drip irrigation system that waters underground instead of just the surface.

For the rest of your garden, you may want to install drip irrigation. There are tons to choose from but this is the kit we have and have gotten numerous years use from. 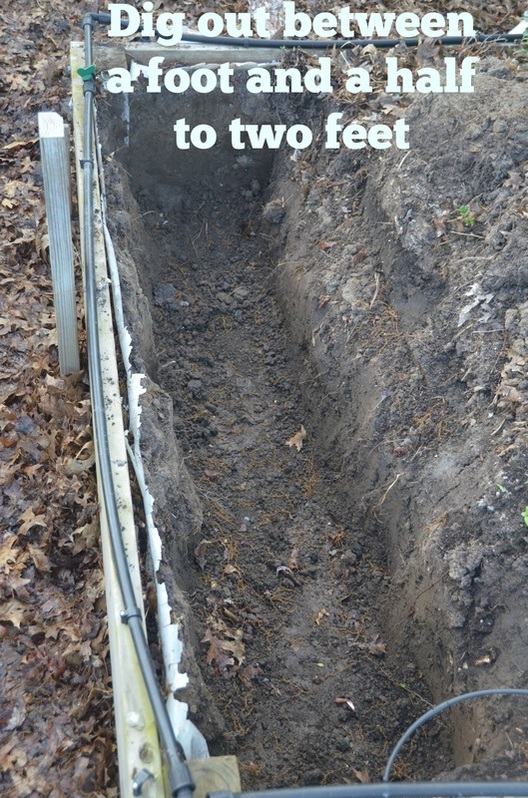 Why you should plant tomatoes on their side.

Planting tomatoes on their sides is a good idea to encourage nutrient absorption.

We pinched the yellowed leaves off the bottom half of the stem to increase the stem length as tomatoes need to get buried very deep.

Now the stem portion that is buried will form roots, giving the plant the best foundation possible and allowing the plant a greater ability to absorb these nutrients and water.

Plus a larger root system near the soil surface will mean that more heat will be available to the plant, producing earlier tomatoes.

Place your plants on their sides for a day or two prior to planting so they naturally bend towards the sun. 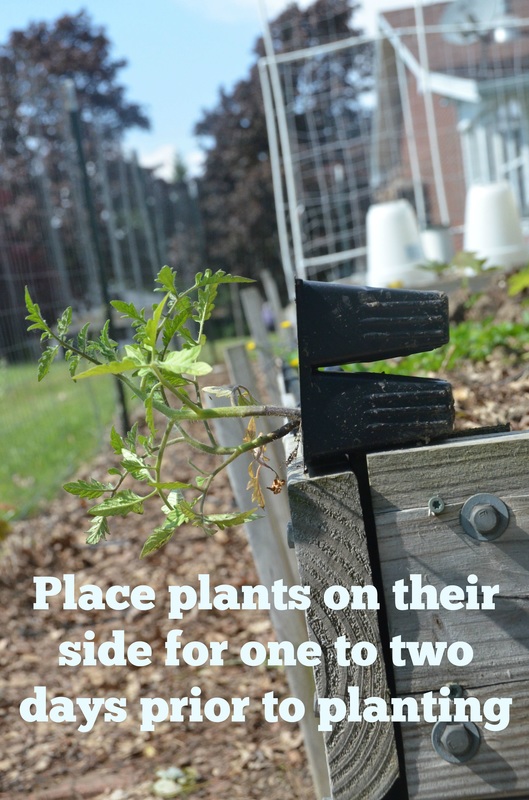 How-to use PVC tubes to water and fertilize your tomatoes

But when I’m thirsty, I want a big drink of water to hydrate me. No need to get wet.

Tomatoes feel this way too. Their leaves and branches shudder at water touching them but their root systems are thirsty and desire to be quenched.

After drilling holes into the PVC tubes for drainage purposes, you will bury these tubes into the ground and plant your tomatoes around them.

Water will be poured into the top. But first, compost is added directly into these tubes not only to slow the release of the water, but to feed the plants with compost tea.

As water is poured into these tubes, it absorbs these nutrients from the compost to feed your plants. 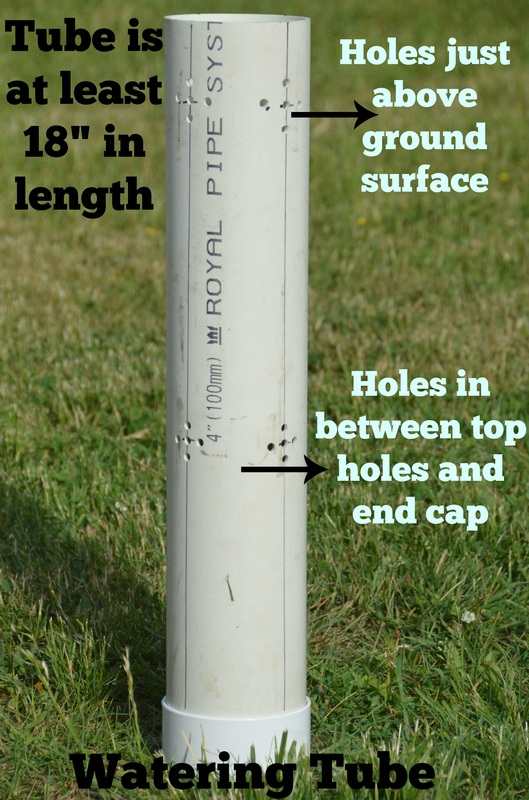 Insider tip: You don’t have to use 4-inch diameter tubes as we did, you could use 6 or 8-inch tubes. Then you wouldn’t have to water as frequently.

We redid our ditch and had leftover drain line. And Tom doesn’t let anything go to waste! 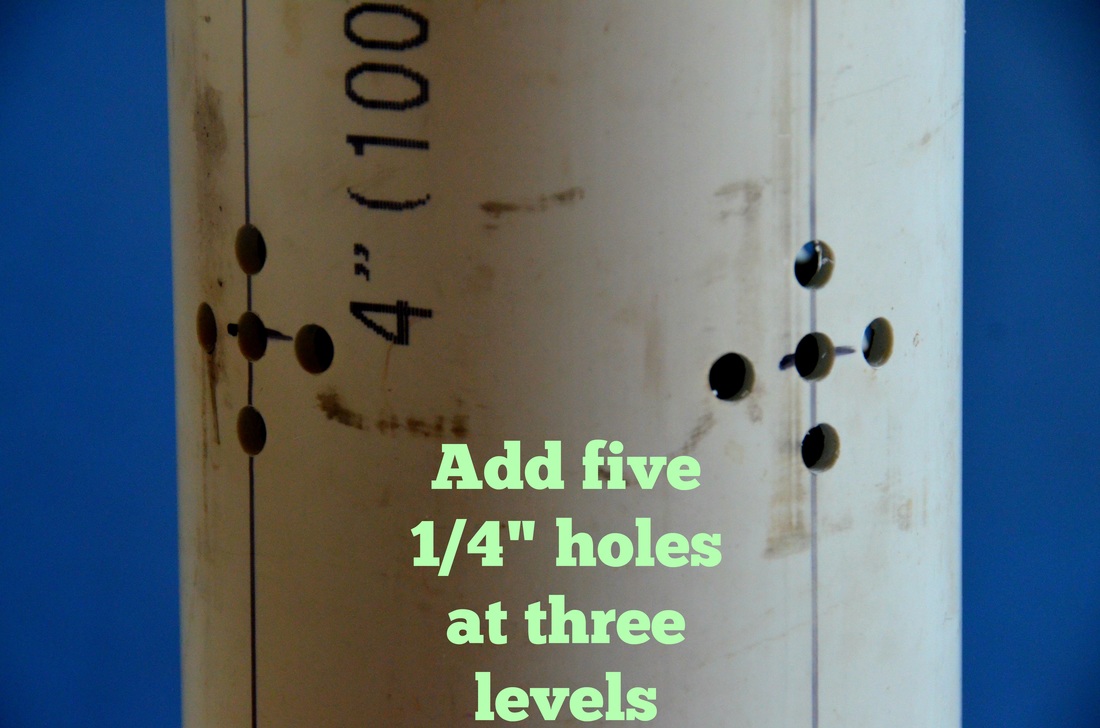 For the four plants that will be centered around this tube Tom drilled five holes into the pipe in a circular pattern at two different levels, one higher (just above ground level) and one in between the end cap and higher holes.

So each plant gets ten holes each.

You can adjust this number based on how big your holes are (Tom drilled with a 1/4″ drill bit) and how much water you want to leak out.

Obviously, the bigger the hole, the faster the water will seep out of the tube. 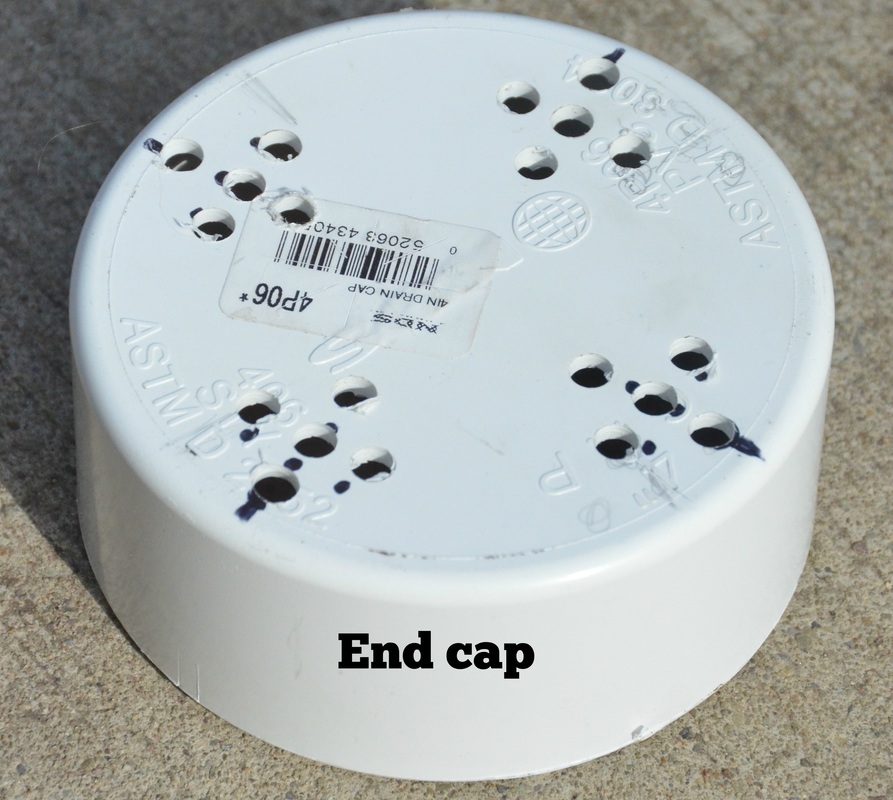 Just like any pot, you want holes in the bottom of your end cap for proper drainage.

Most plants don’t like just sitting in standing water and once your tomato roots get deep enough they will absorb this water as well. 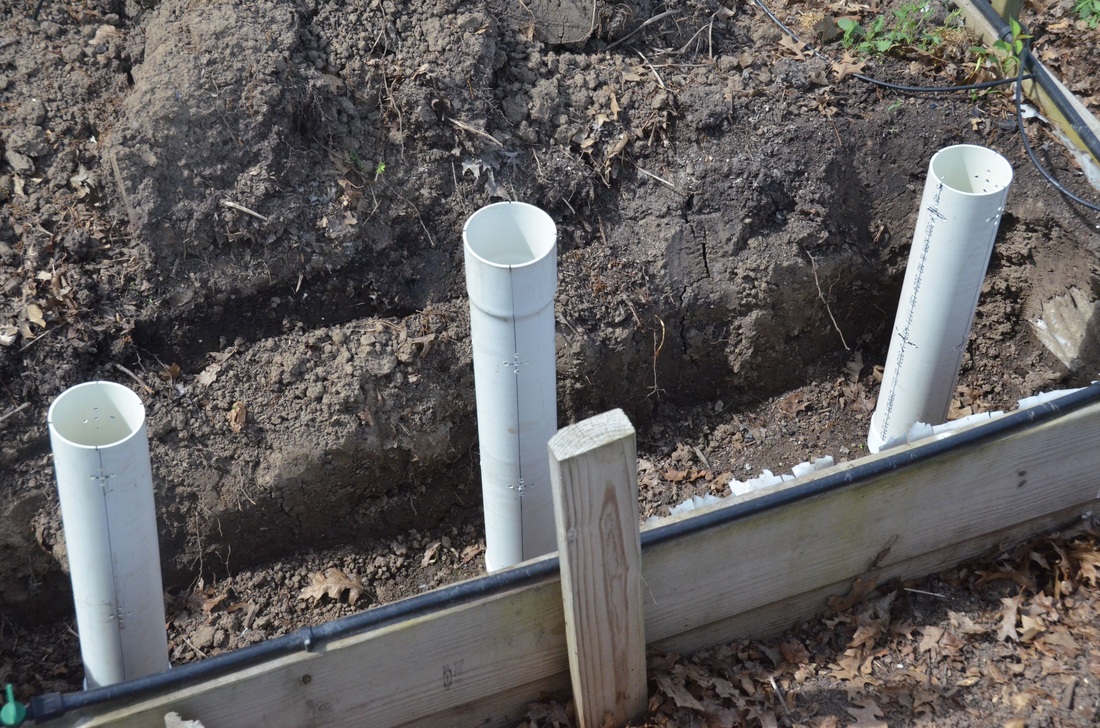 We buried three tubes equally spaced in the trench that will each have four tomato plants scattered around them.

Twelve plants in total will thrive in this trench.

They are tightly packed so hopefully we will be able to encourage upward growth! 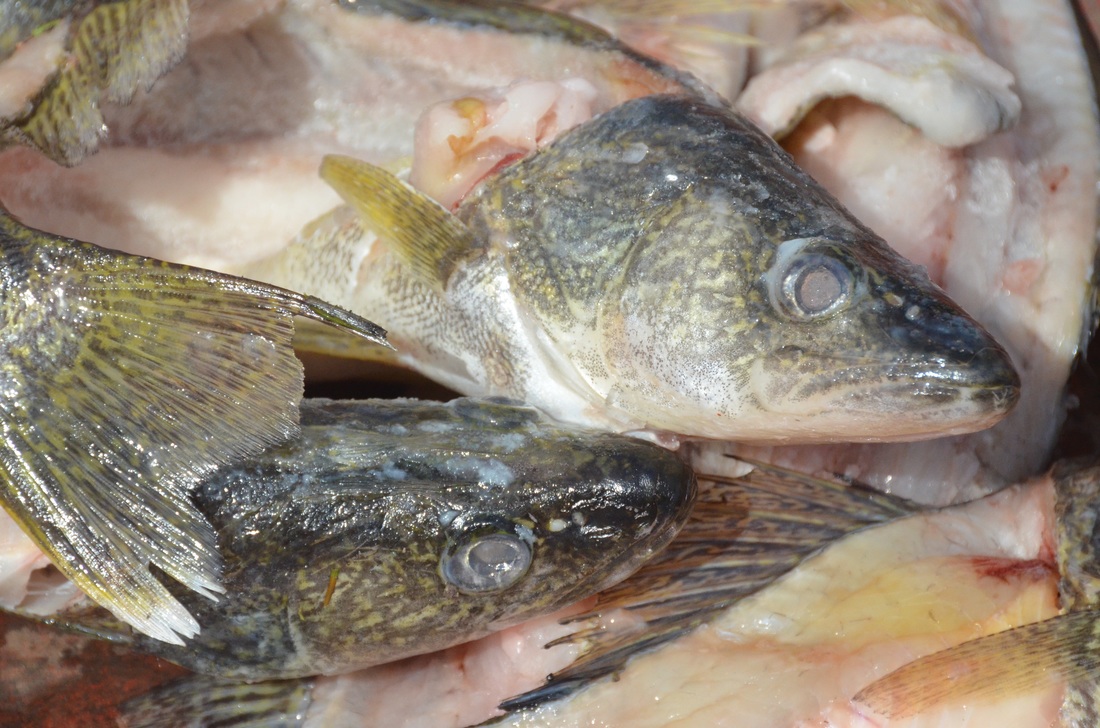 Why use fish to grow bigger tomatoes?

Although tomatoes are fairly easy to grow, they are heavy feeders requiring lots of nutrients like phosphorus, calcium and to a lesser extent nitrogen.

The more fertilizer love they get, the more flowers they produce and the more fruit you’ll get in the form of big, luscious tomatoes. 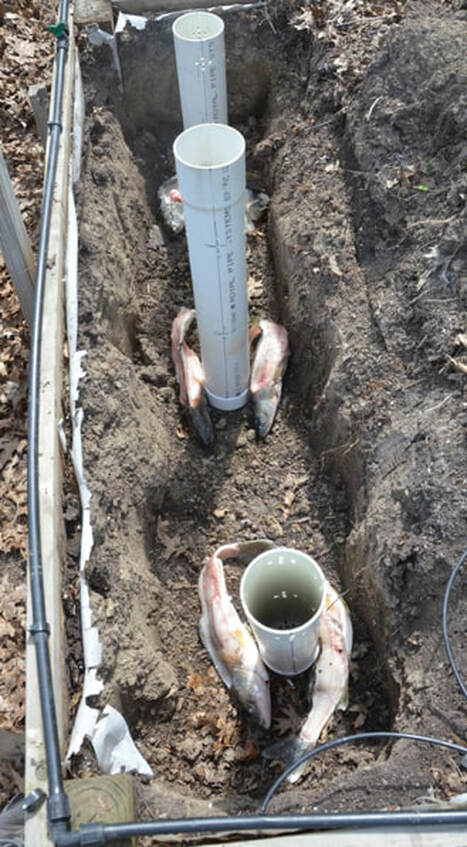 Fish has loads of nitrogen which encourages lots of leaf and branch growth making the plant flourish. Of course you don’t want too much nitrogen as that could result in large beefy plants with no flowers to form tomatoes.

But fish parts seem to strike the perfect nitrogen balance as it also provides lots of minerals and vitamins, too.

Plus, tomatoes need lots of water. Adding tons of water depletes soil nutrients so we’re putting them back in using various amendments.

The various fish parts like the bones, heads and guts (sorry, this is grossing even me out) contain lots of these beneficial nutrients that decay fast for a quick boost of nitrogen, phosphorus and calcium for your plants.

As the protein of the fish breaks down all these super nutrients are released into the soil directly to your plants supporting root and foliage growth.

Insider tip: If you freeze the fish before using, you won’t have to deal with any unpleasant smells! 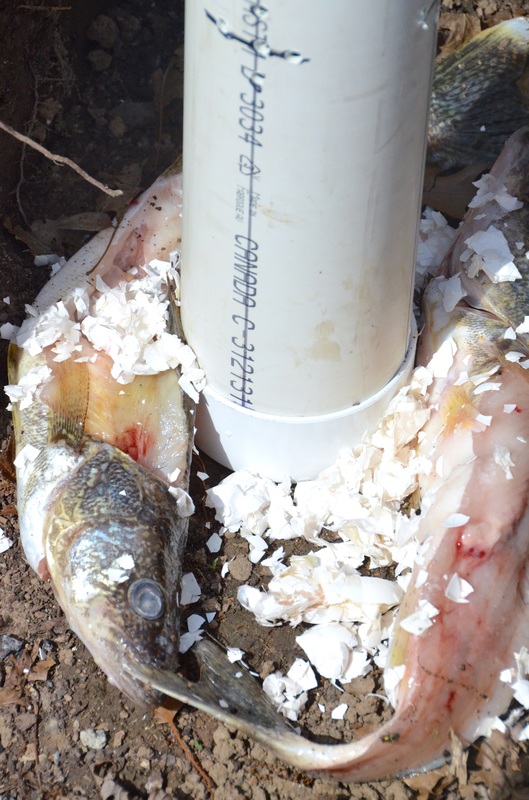 Tom and family are big into fishing as are his co-workers so getting fish was a breeze for us.

But you could contact your local restaurant and ask what they do with their leftover fish parts. Most are happy to oblige after a few blank stares!

Why use crushed eggshells to grow bigger tomatoes?

Eggshells are loaded in calcium.

Eggshells provide this boost of calcium to the soil to be soaked up by your plants as well as helping level off your soil pH.

Eggshells do not break down well on their own so use your hands to crumble them first and spread around the tubes.

They also help fend off blossom-end rot in tomatoes and other nightshade fruits! Here’s another fantastic way to use eggshells. 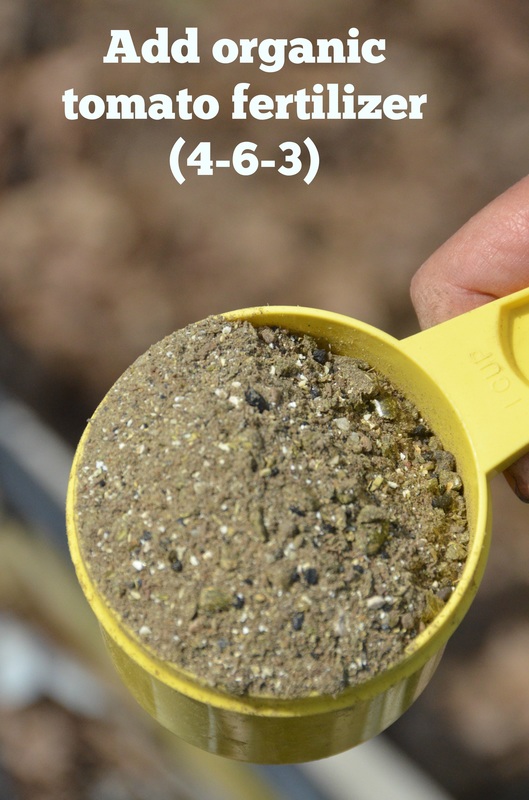 Next, we added fertilizer as tomatoes love fertilizer. We ended up scattering a cup of Dr. Earth 4-6-3 fertilizer around each tube that is a safe fertilizer for both people and pets.
Last time I checked, it was super on sale, too if you click just above. Yay! 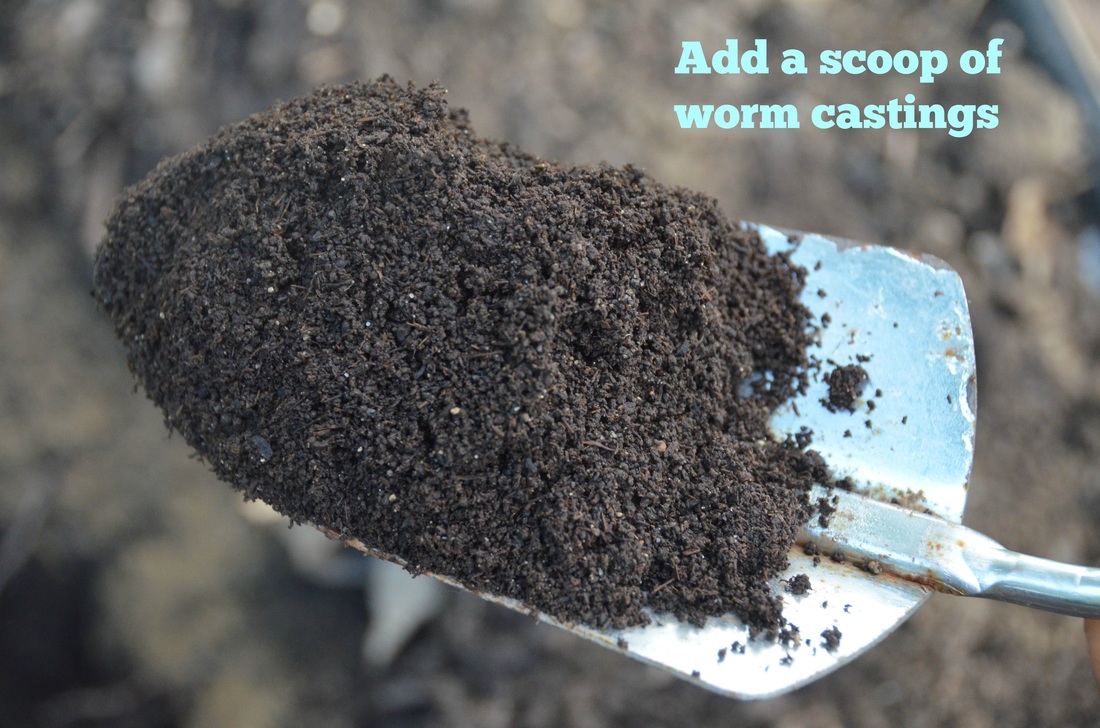 Add a scoop of worm castings. Remember worm poop is gardener’s gold!
A scoop goes a long way to help make the biggest and best tomatoes. 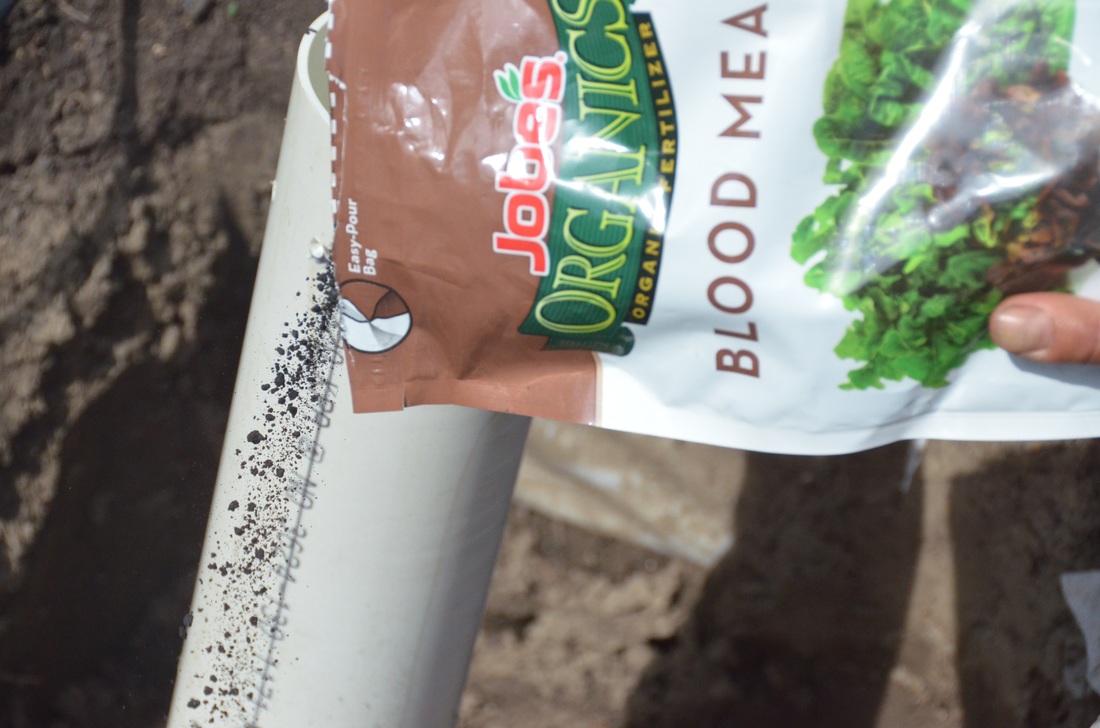 For just a little extra nitrogen, we added just a pinch of blood meal around each tube to get those plants to flourish.
They were quite leggy and weak by the time we actually got them planted! Besides, if too much nitrogen is added, I depend on the carbon in the leaves to balance things out. 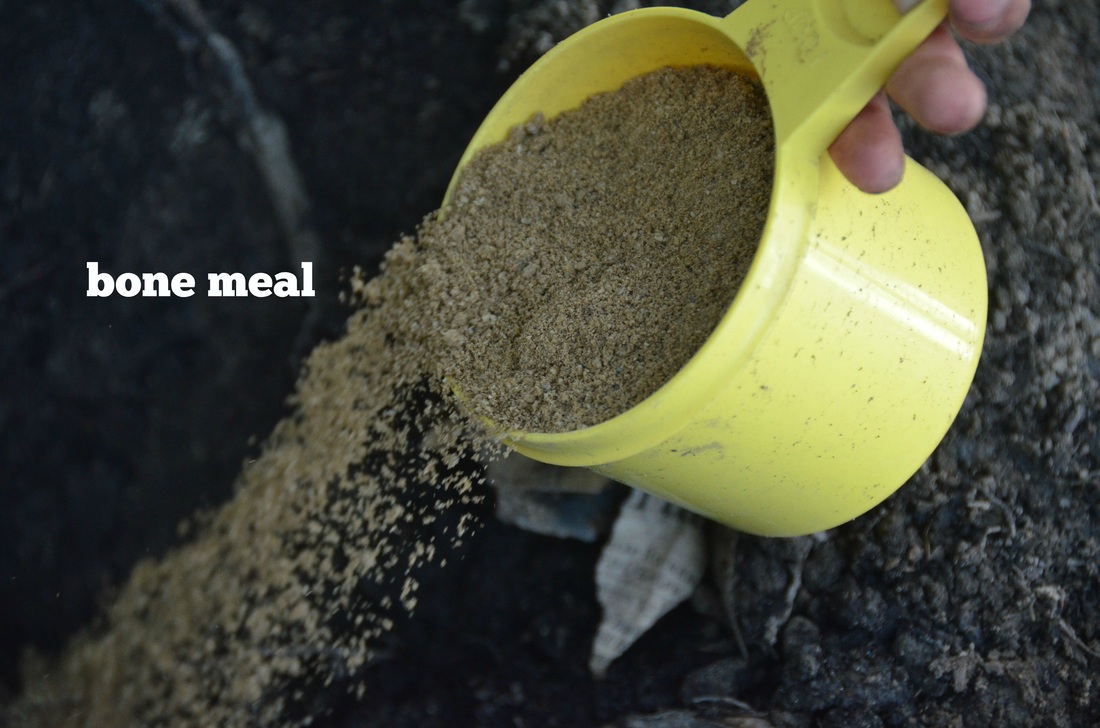 Double the amount of bone meal to blood meal. Bone meal is another excellent source of calcium. 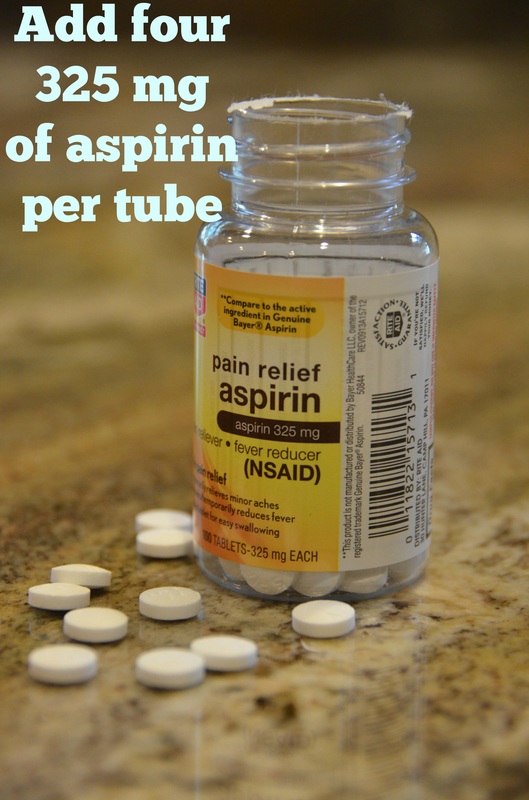 Why use aspirin to grow disease-free tomatoes?

Aspirin boosts the immune system of the tomato plants similar to how we would take zinc or echinacea to ward off a cold.

Except the tomatoes are keeping leaf spot and blight at bay.

The salicylic acid of aspirin mimics a hormone in tomato plants. The hormone naturally triggers a defense response in tomatoes.

So you are tricking your tomatoes into triggering a defense response by giving it aspirin before diseases arrive.

There are two basic ways to use aspirin

1.) Put them whole down your tubes (or place a few whole in your tomato/nightshade hole prior to planting)

​2.) Make an aspirin spray to squirt on your tomato plants 2-3 times monthly. We use 1 (325 mg.) aspirin per 1 gallon of water. {You will need to grind them up first for the spray}

Bigger yield due to stronger, thicker tomato leaves that are less susceptible to the spores of diseases. 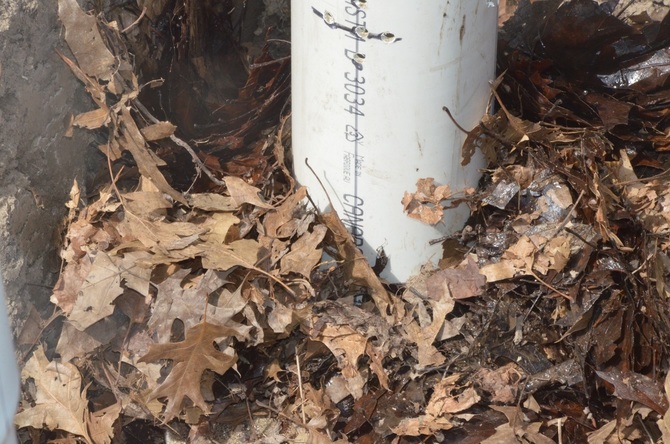 Leaves are packed with trace minerals.

A fabulous source of carbon, leaves balance the nitrogen in the compost pile around your tubes.

We got lazy and dumped them in whole, but ideally they should be chopped first. The more rotten…the better!

We typically chop ours by riding them over with the lawn mower and then dumping them into the garden. 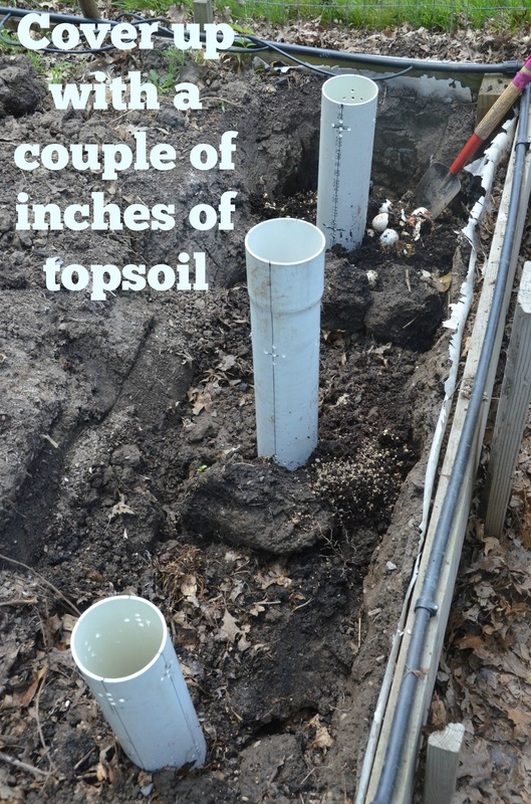 Your trenches or holes are dug deep enough so that you’ll be able to bury your ingredients before actually planting.

You’ll want to add some topsoil to cover your amendments and then plant your tomatoes. The topsoil will also help stabilize those pipes prior to planting. 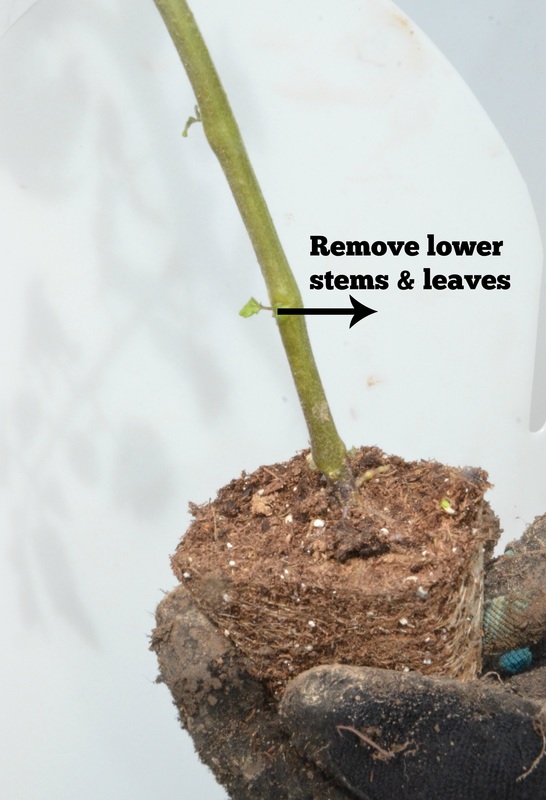 We also pinched off the new shoots off the bottom half of the plant leaving only the topmost leaves to foster the best root growth possible.

We want those roots to grow strong and deep first! Those lower leaves would have gotten buried sapping strength from the plant that now we’re forcing to the roots.

Insider tip: Before dropping the plant into the hole, first gently loosen the root ball with your hands untangling a few roots if possible. This gets the plants acclimated and ready to grow quicker! 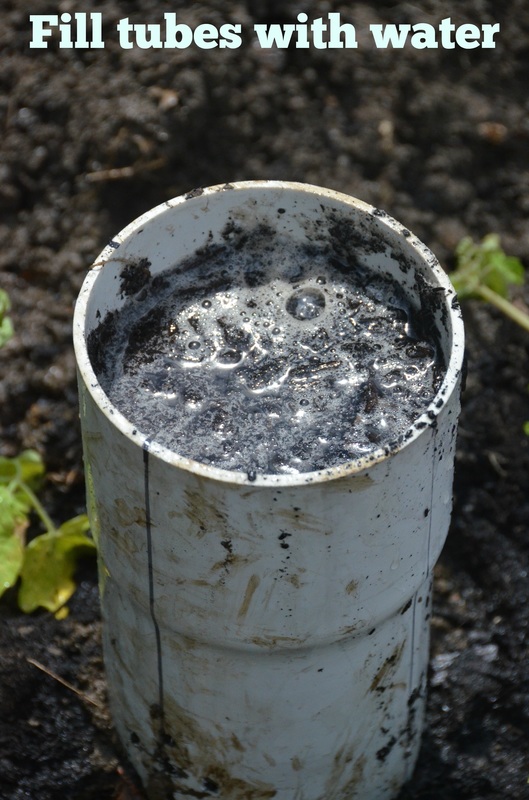 After burying the tubes and placing those tomato plants deep it’s time to fill your tubes. We created our own compost with our green and brown waste in plastic compost bins.

This first gets added directly into the tubes. Then pour water into the tubes. As the water funnels through the tubes and leaks into the holes, it absorbs much of the nutrients from this compost.

Essentially, you are watering with compost tea! Are you ready to grow the biggest and best tomatoes ever?

The shots after the tomatoes get the royal treatment!

I only ended up taking “after” shots of my cherry tomatoes but the photo’s still highlight how lush, green and humongous the plants got.

And those plants produced lots of big, bold and beautiful tomatoes for my family, neighbors and friends! 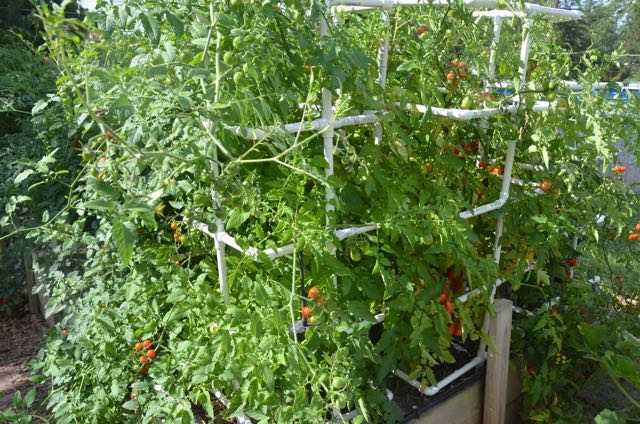 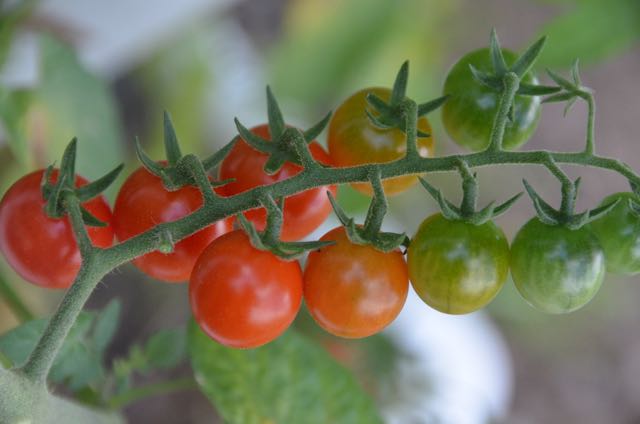 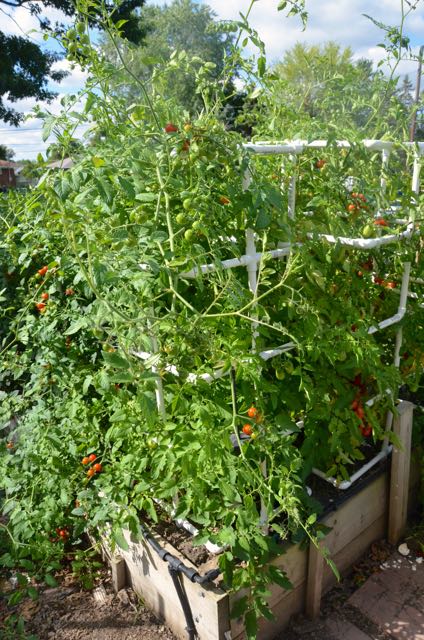 Here’s how to make these awesome DIY PVC pipe trellises. Works like magic!
Are you ready to grow the biggest and best tomatoes?
Previous Post: « Chopping away with WÜSTHOF and $170 knife giveaway!
Next Post: Plants for the good cook! »