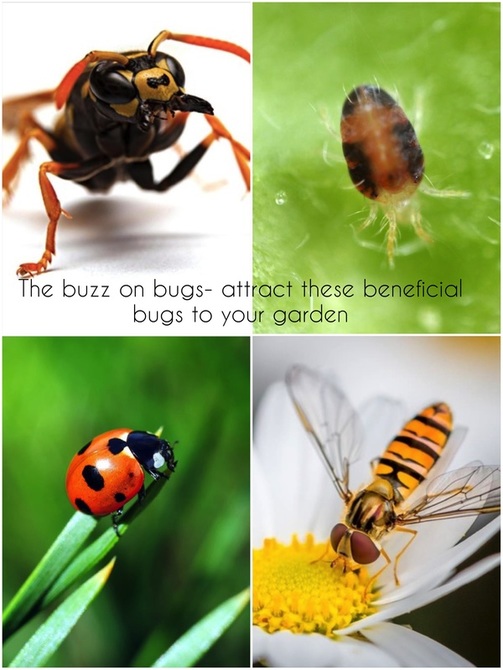 I was stung 9 times on my butt for my 9th anniversary while hiking with my husband last year. As I stepped on a yellow jacket nest they flew up my shorts. You wouldn’t believe how swollen my butt was! Okay, maybe you can get the visual. And oh, the pain. Followed by the itching. It was unbearable. No photo’s for this one. Anyhow, as I was wallowing on the couch, it got me thinking. “What is the purpose of a yellow jacket?” 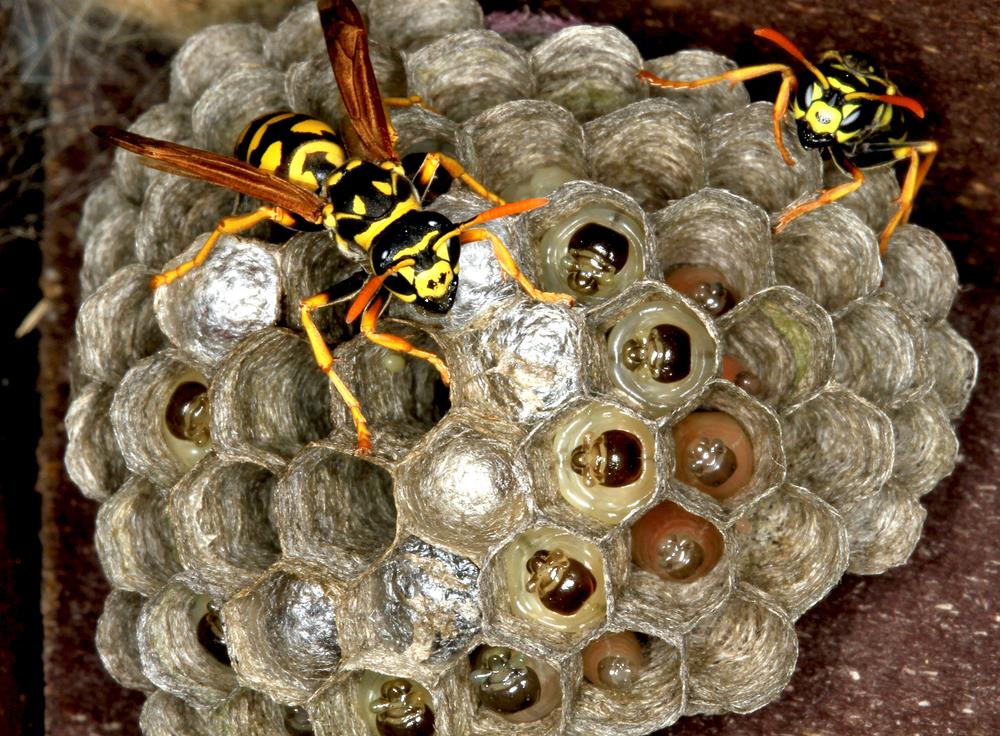 I mean, they don’t even produce honey. Well, not honey fit for human consumption. As it turns out, predatory wasps are some of the most helpful insects in the garden. Not only do they eat the pests that chomp away at my garden but they kill insect eggs and help control caterpillar populations. So as they savor the nectar and pollen from my flowers they are also stinging and paralyzing their prey. Best of all, you’re organically treating your plants and soil without the use of harmful, synthetic pesticides and their toxic fumes. Here’s 8 more bugs to get in your garden and reasons to keep them happy. 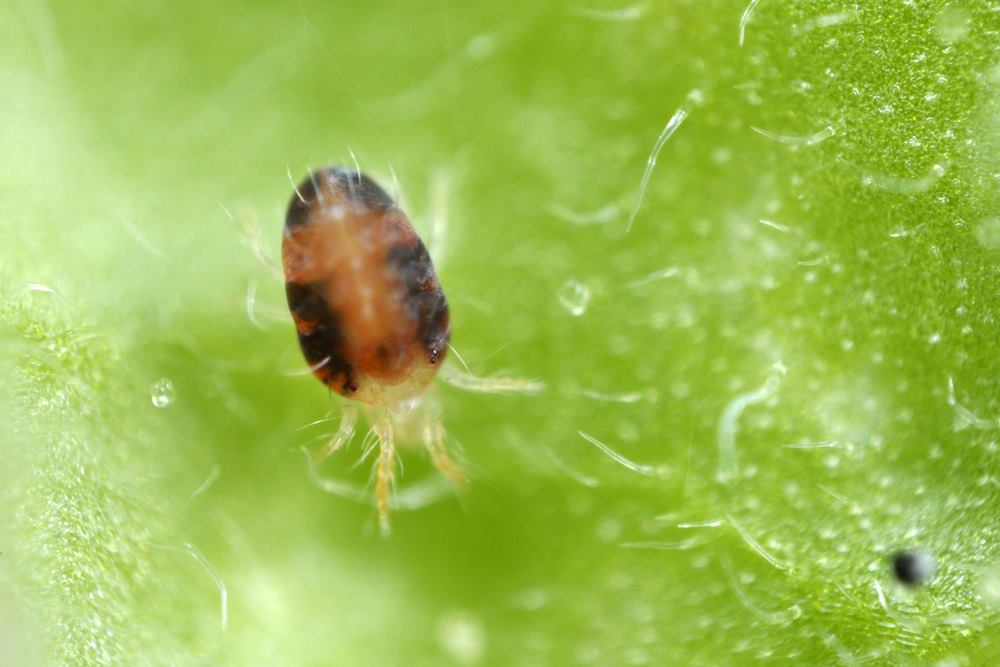 These tiny predatory mites exclusively eat the two-spotted mite and are equally important for spider mite and citrus mite control. For this reason, they are highly valued by greenhouse growers and heavily used in fruit orchards and farms, and are even sold commercially for use on house plants.

Once you release these predators, they immediately begin feeding on pest mites, which are often abundant underneath plant leaves. The females start laying eggs which will hatch in just a few days. Their young feeds on pest eggs as the cycle continues. Within two to three weeks your infestation is usually under control.

And mites are so tiny that they can get into places that pesticide sprays can’t. They love pollen and humidity making a greenhouse environment ideal. For outdoor use, release your predatory mites on azaleas, fruit trees and anywhere in your vegetable garden.

For indoor plants, consider spraying an insecticidal soap first, prior to releasing any predatory mites. Try getting your own mites by mail-order, ordering on-line, or from an agricultural college. 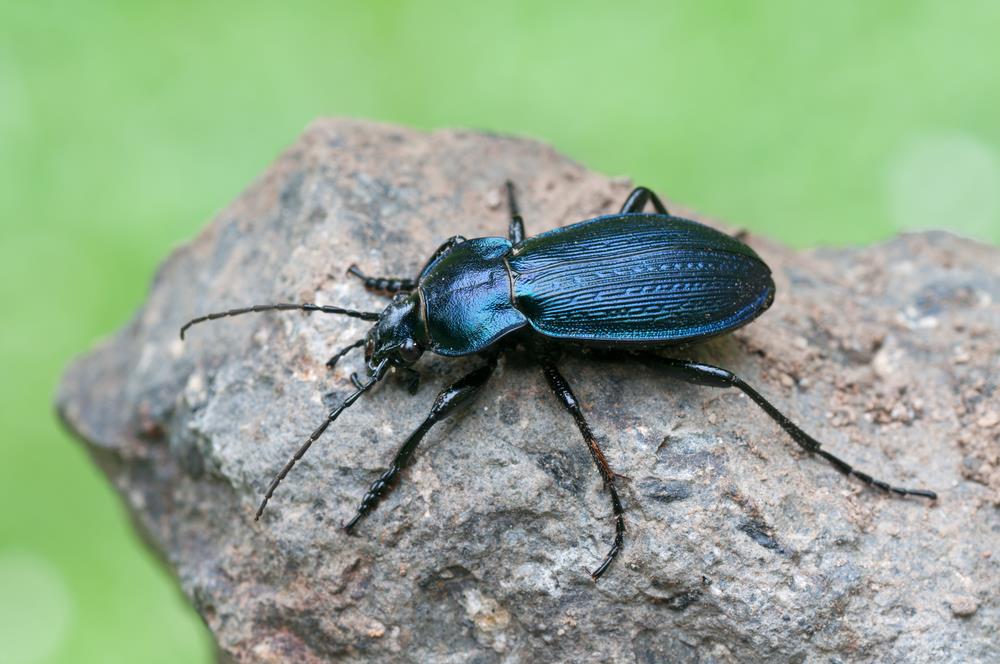 Got slugs? Snails? Cutworms? Cabbage maggots? Aphids? Caterpillars? Then you need some ground beetles to rid yourself of these pests. These large, long-legged, shiny blue, black or brown nocturnal bugs are fantastic at keeping those night-time pests under control.

In fact, ground beetles hunt more than 50 types of pests! And just one beetle larva can eat more than 50 caterpillars, a huge problem in my garden.

Caterpillars nearly destroyed my tomato crop last year. Attract these good guys by providing lots of perennial groundcovers, stones, or logs where they can comfortably hide underneath. They also love decaying plant matter to lay their eggs in, so keep your garden mulched, all year long. Mulch is especially important if you don’t grow perennials next to your vegetables to create a stable habitat. 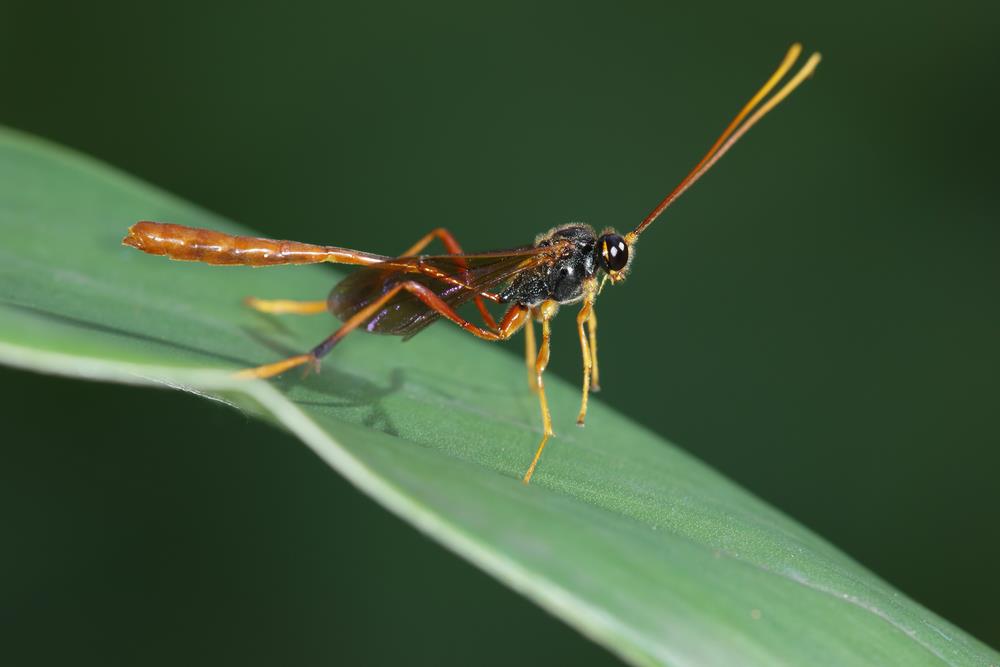 Most parasitic wasps can’t even sting and pose no danger to humans. In fact, they’re so tiny you can barely see them, but these mini-wasps are powerhouses in the garden as they attack the eggs of pests. Attract them with pollen and nectar plants. Thousands of species of parasitic wasps exist, too many to explain on this post, but one fact remains: they use other insects to house and feed their developing young. And the majority of these hosts insects are considered pests.

So if you’re an organic gardener who wants to keep the bad bugs at bay, you’ll want to bring in the parasitic wasps. Ways to make them happy are shallow birdbaths or small pans of water, lots of plant variety to provide that nectar and pollen, and preferred food sources such as alyssum, cilantro, herbs from the dill family, daisies and asters.

Some of the pests you can count on them for are cutworms, corn earworms, white grubs, caterpillars, cabbage worms, tomato hornworms, army worms, webworms, and corn borers. See, these are the good guys! 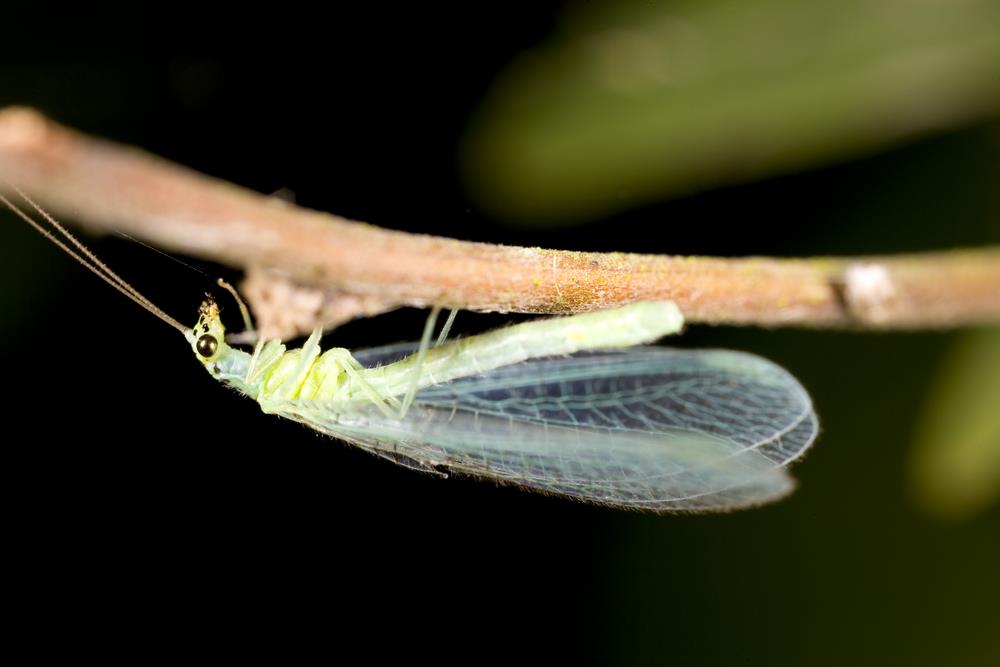 I guess they settle down when they become adults because adult lacewings do not kill other insects subsisting on pollen and sweet nectar instead. But their larvae?!? Those voracious predators devour aphids, caterpillars, spider mites, insect eggs, mealybugs, scales, moth eggs, thrips, and whiteflies. Try planting angelica, coreopsis, cosmos, and sweet alyssum if you want to please them.

Lacewing larvae kind of look like a tiny alligator. With their tiny pincers they attack their prey, injecting a paralyzing venom then drawing out the body fluids of its victim.  Hmmm. I hope you weren’t eating breakfast or even your snack. So during this 2-3 week larvae stage they will devour up to 200 victims a week. As the cycle continues, they pupate by spinning a cocoon with silken thread and about five days later the adult emerges.

As a general rule, you’ll want about 1,000 eggs per 2,500 square feet. Since you only have about 2-3 weeks of vigorous feeding, a second release might be required. You can always order online from many reputable “bug” companies or even Amazon as silly as that sounds! 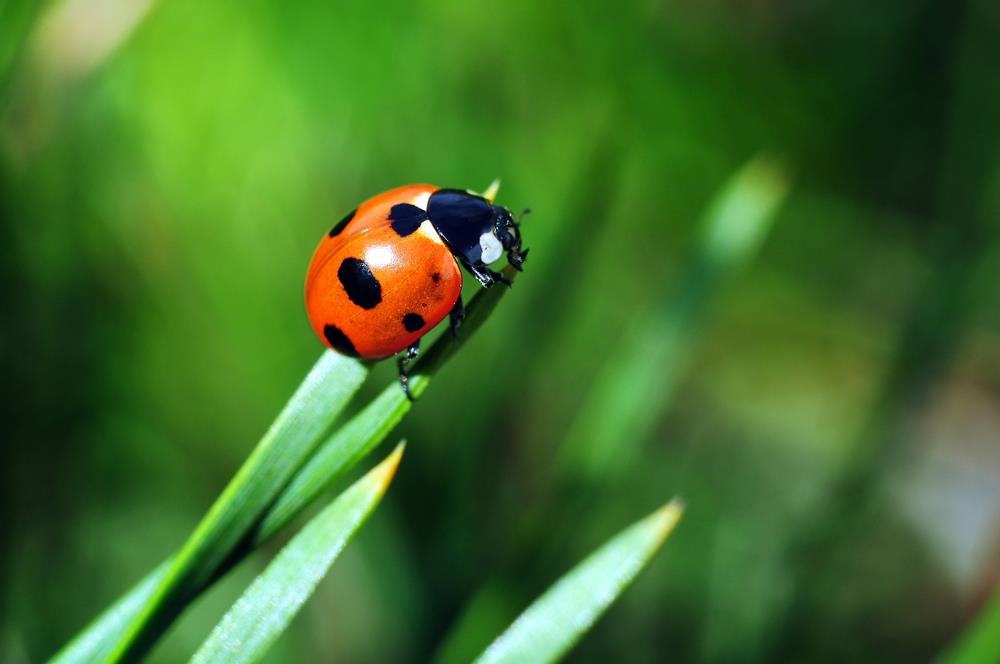 Lady beetles or ladybugs are probably the top dog of good insects and probably the first that pops into your head. Both the adult version and their larvae will feed on pests as long as they are not too hard shelled, too fast moving, or too large. Yes, the adults enjoy their aphids, mealybugs, and mites, but their larvae really get the job done too.

With their voracious appetites, they can slash an infestation and get your garden under control in no time. Easy to order online, but also easy to attract on your own with any member of the parsley family. Go with carrots, dill, fennel, yarrow and of course…parsley if you want to win them over. A chemical-free yard with plenty of mulch coupled with organic gardening practices is always a win-win situation. 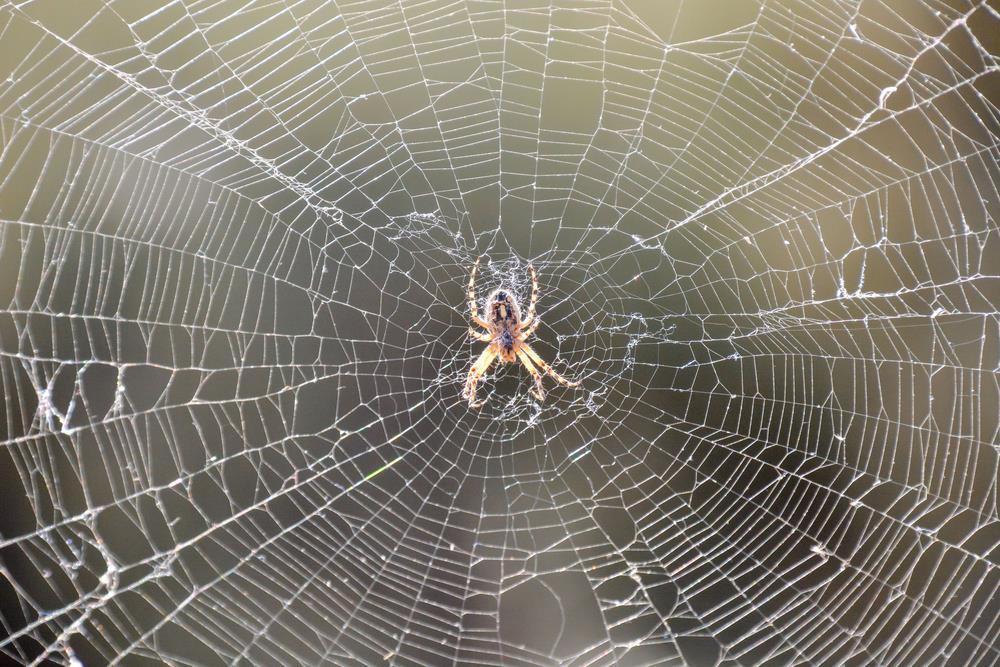 Forget about Little Miss Muffet. She was totally wrong! Spiders are superb in the garden. All spiders munch on insects and are vital if you want to prevent pest outbreaks. And don’t worry…the spiders found in gardens do not move indoors and neither are they poisonous. Some say they do an even better job than birds at going after pests! Quite efficient.

They love straw mulches and ground covers with perennials. Companion planting of flowers among your veggies will also draw them in. Maybe you’ll even see a spider web hung between your stalks of corn or among your bean poles, both a good sign! 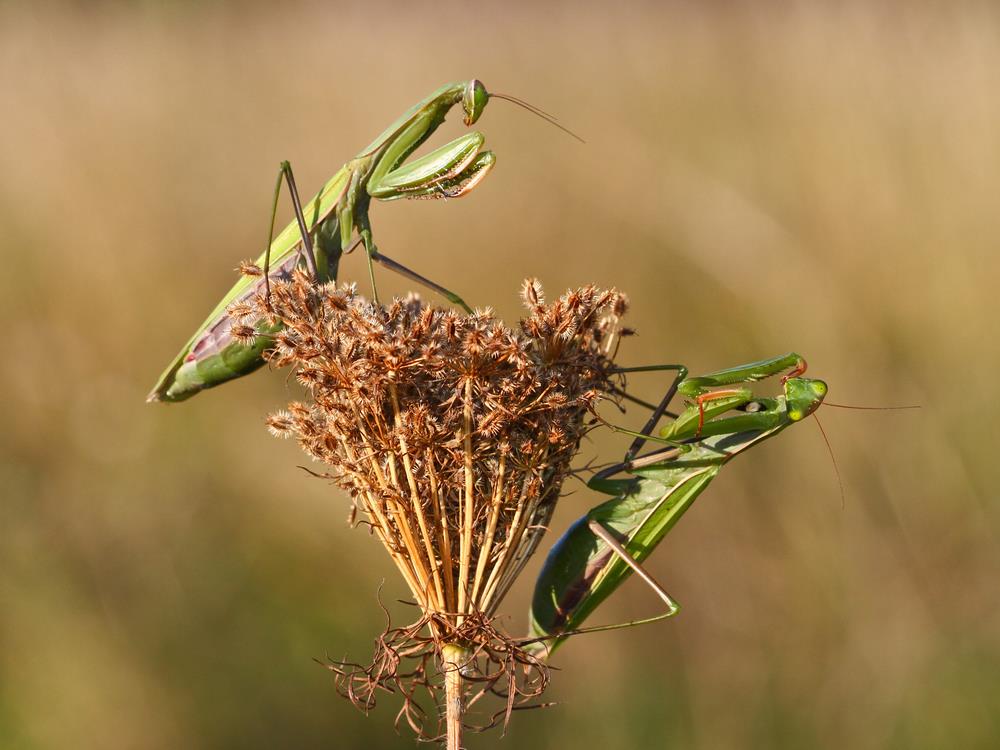 With their big innocent looking eyes and forelegs clasped together as if in prayer…how do you not fall in love with the praying mantis? In truth, I haven’t seen one in years, at least in my home garden but they have a ton of benefits. Despite their prayer pose, they are a ferocious general predator and feed on aphids, beetles and flies.

The drawback (okay, it’s a huge drawback) is that they do eat other beneficial insects. But hey, we decided to include them in this post anyhow because we can’t resist them. And those motionless front legs that give off the impression they are praying?…they are actually using those to hold their prey. 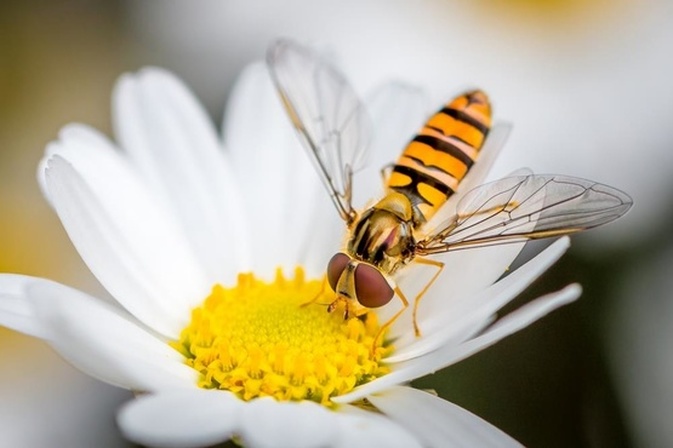 Hover flies are also called flower flies or syrphid flies. They kind of look like tiny bees with their striped abdomens and hover kind of like a helicopter. Strongly attracted to flowers like cosmos and coreopsis, you’ll want to plant plenty so they can feed on the nectar and pollen. The larvae feed on aphids in small places where the other bugs can’t go.

Where there are high larvae populations, they may even control 70%-100% of an aphid population. Aphids cause millions of dollars in damage to crops worldwide.

In particular, you’ll want these guys around in the early spring, before the other beneficial insects are yet active to keep away the scale insects, mealybugs, caterpillars and thrips. Added bonus? They also pollinate strawberries and raspberries and help to produce larger fruits and higher yields. One last fun fact: they can fly backwards!

How many of these bugs have you seen in your garden?
Previous Post: « Backyard ambience with Desert Steel Torches Giveaway!
Next Post: Easy DIY tomato, cucumber & squash PVC pipe cage »