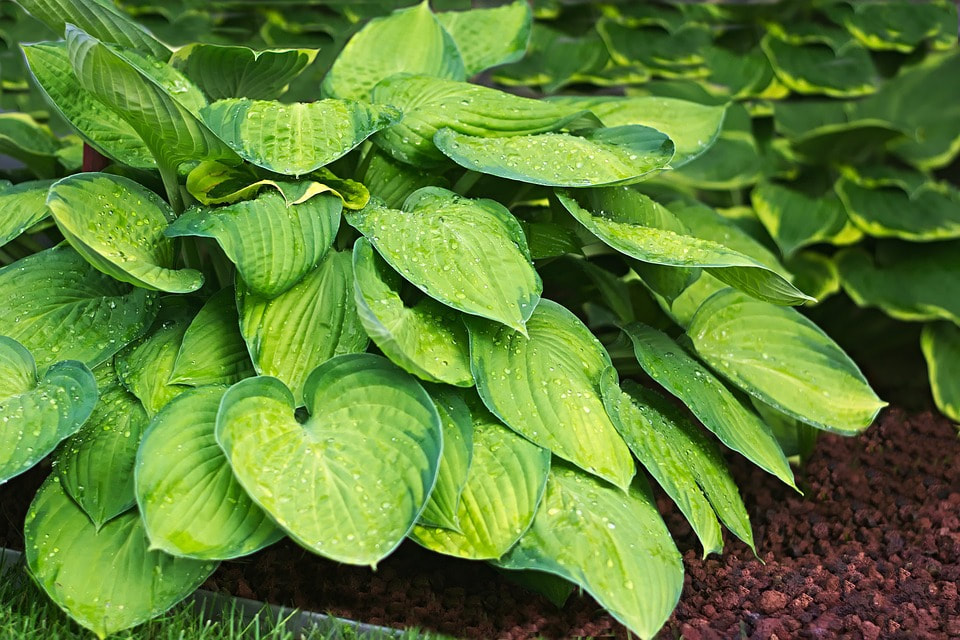 Ever start a home or garden project only because you absolutely had too? Your hands were tied!

That’s where I’m at right now.

I had no intention, none whatsoever of dividing my hosta plants this fall. But to make way for the new patio I had to.

Not knowing the day or the hour the patio is coming is stressing me out of my mind.

The new patio is slated to go over my perennial/bulb beds. Any plants I want to save have to be dug out pronto or get paved over.

So to save those cherished hostas I got to work. Tom helped quite a bit, too!

​I will say, many of them had gotten too large, so it was timely pursuit. But with three young kids, I’ve become a “needs must” type of gal.

Since the plants had to be moved out of that location, it was the time to divide up the larger plants before moving them to their new home.

This is the insider scoop on plant division! 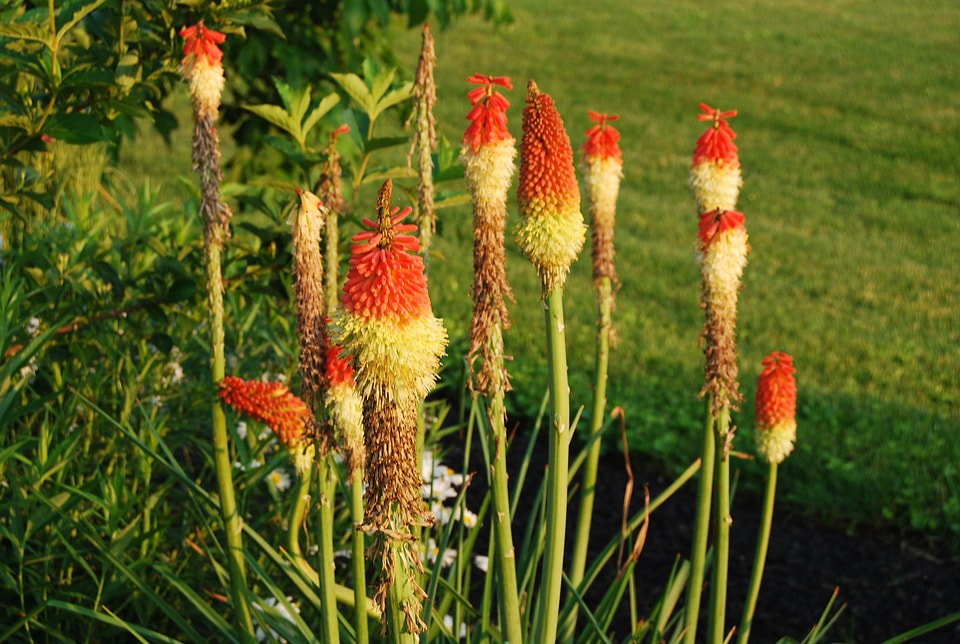 My red hot poker plants were getting too big for their britches and had to be divided!

Shoulda….coulda… when to hack off a piece of plant

Be mindful that just because a plant can be divided doesn’t always mean it should be divided.

After all, you are taking a spade and hacking off a chunk of a beloved plant.

​If you aren’t careful instead of getting two or three plants, you are going to end up with none at all if you hack away without discretion.

When you dig up a perennial, you’ll notice that it fits into five basic root types: roots that form clumps or offsets, surface roots, underground running roots, taproots or woody roots.

Bear this in mind when dividing and conquering those perennial plants!  Let it be known that not all perennials weren’t meant to be hacked away with a spade.

​So put down the spade, please! 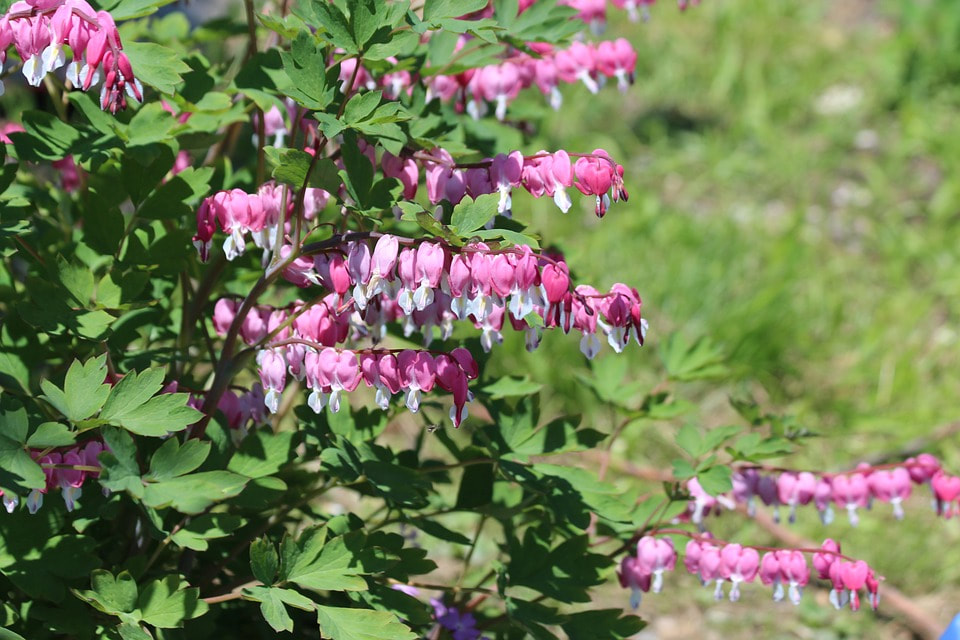 Water those plants extremely well in the days prior to the division. Ensuring that the mother plant is fully hydrated and replenished is the key to success.

If you’ve had a spell of heavy rain, then it just might be a sign that it’s time to divide and replant.

Wet topsoil is easier to break up and more manageable when transplanting.

The ground is softer for not only digging up the plants but transplanting to the new hole. No sweat!

I failed to give my Russian sage enough water prior to relocating and quite honestly, it’s not doing great.

Fingers crossed that it somehow manages to rebound and comes back next year.  Live and learn! 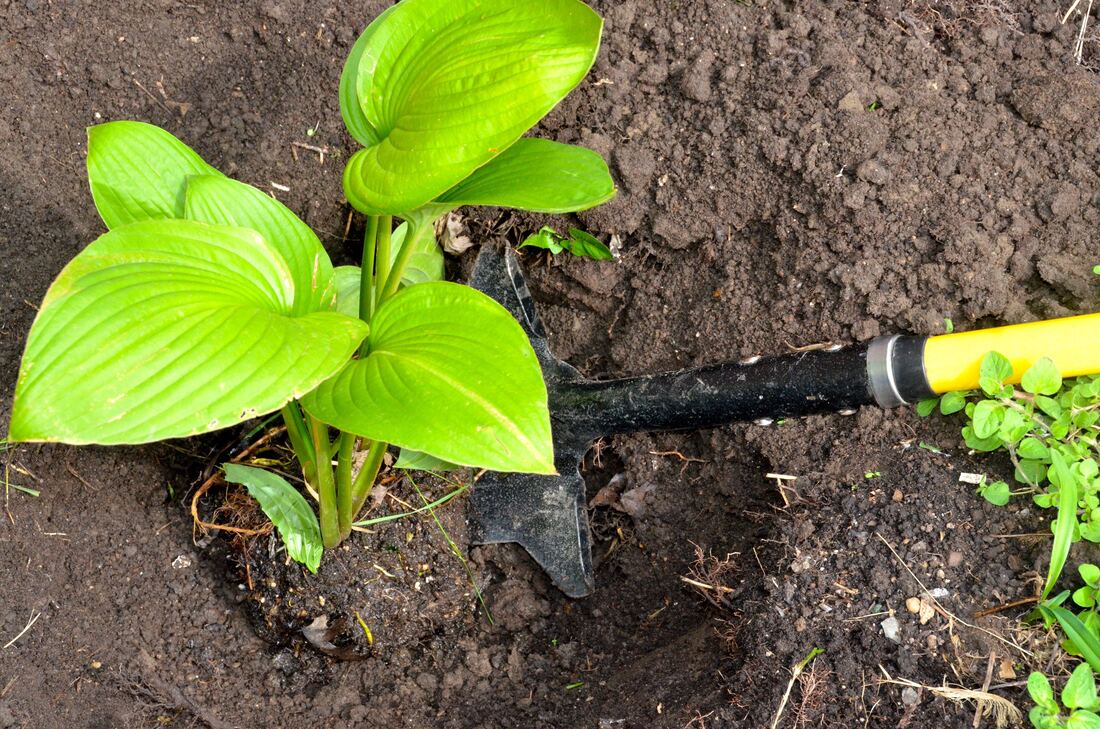 Loosen up and till the soil where you plan on relocating the newly divided plants. It should be extremely crumbly and aerated.

This practice gives the new roots a place to expand and spread and more able to get established down and deep into the ground.

If your soil isn’t fertile, it’s good to add compost and a handful of worm casings into the hole to nourish roots giving the plant a quick boost.

And it’s never a bad idea to add some fresh garden soil in and around the hole when replanting.

Then wait a few weeks (for spring transplants only), until the plant is more established to add a little fertilizer like the Dr. Earth brand.

For fall transplants, I like to wait to fertilize in spring as not to encourage stem and leaf growth. For now, our focus is deep, strong roots! 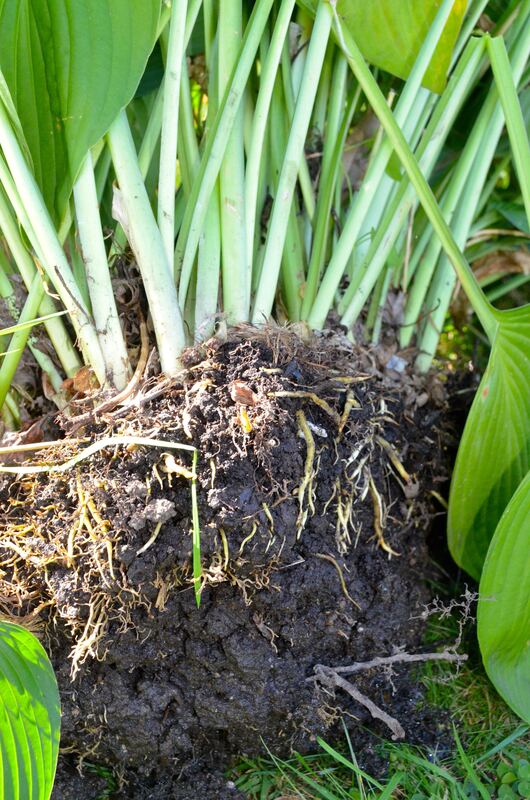 Begin digging at the perennials drip line for minimal damage. The roots will usually extend that far, so digging there lets you lift the plant out with most of it roots intact.

Dig a trench around the clump, and cleanly sever the roots.

Then cut at an angle down and under the clump and all around the perimeter of the plant. Dig and angle until you can pry the plant out of the hole.

For larger plants, you may have to first dig the trench then slice straight down through the center of the plant, halving or even quartering the plant clump before cutting and lifting it out of its hole. 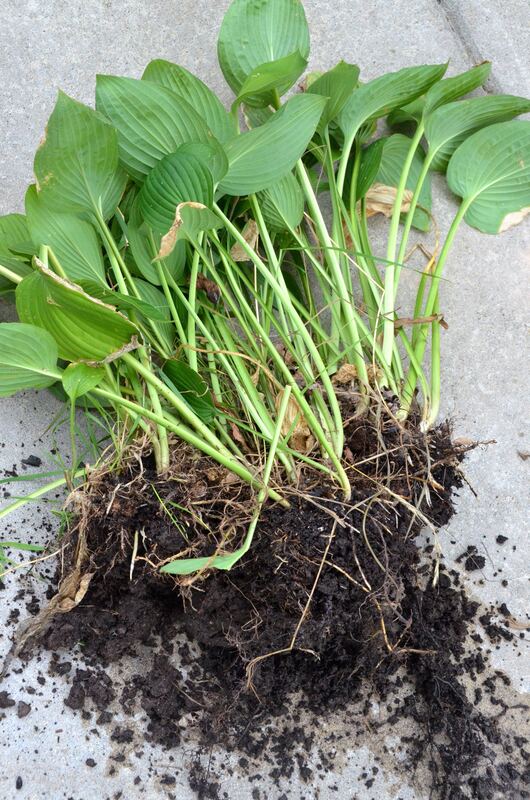 Dig a hole the same depth as the plant was previously. Failure to follow this step will encourage root asphyxia.

​Now is also the time to consider the sun/shade issue.

Was your plant happy with the amount of sun it was getting before? Did it like its current location or would another spot suited it better?

​Does the plant need more sun? Less sun? Would it prefer more acidic soil? Less acidic soil? If any adjustments need to be made, now is your chance! 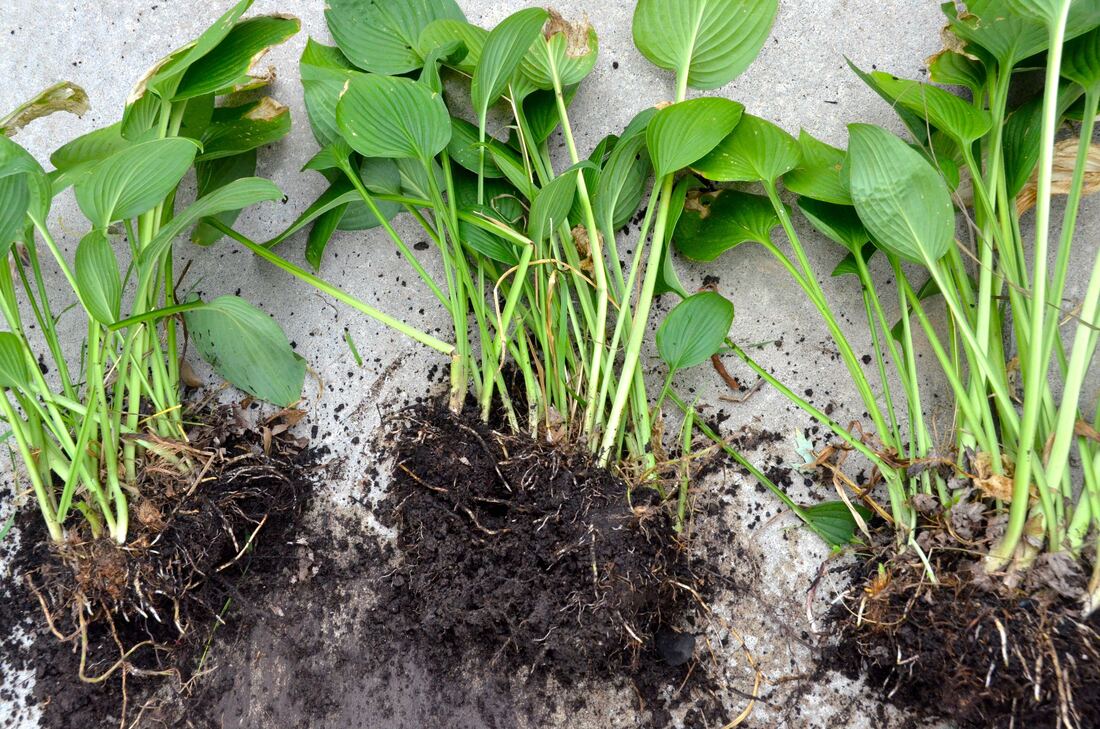 Take a hosta, for example. Divide it into about seven growing points to reap the best results.

​Perennials tend to multiple exponentially~ just one stem is likely to triple or quadruple itself within a short timeframe.

Be generous when plant sharing because if you halve an overgrown clump this year, it will more than double in a season and need dividing again next year! 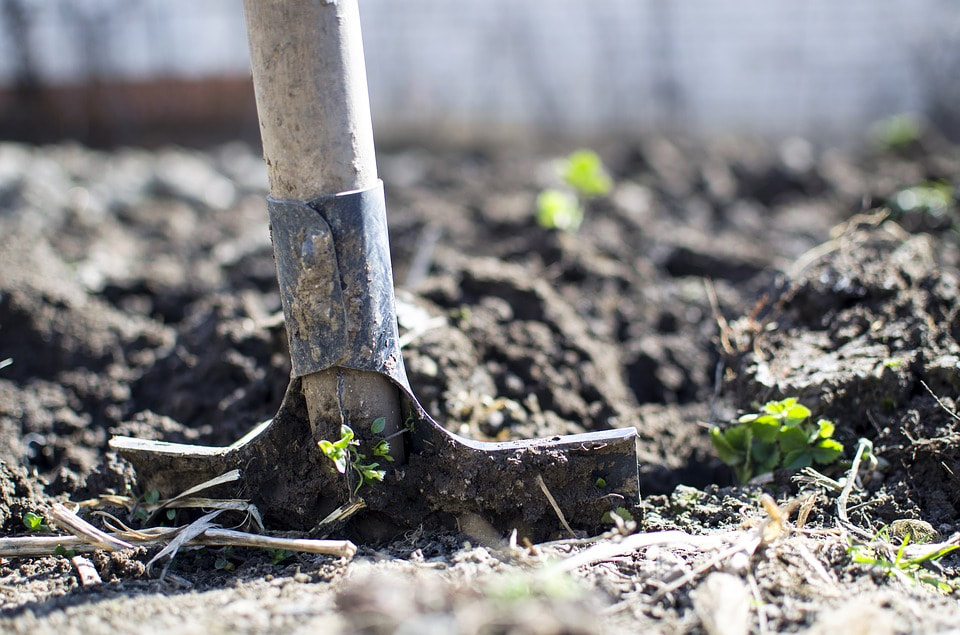 Do place a division into a hole that is at least twice as wide as its roots when spread out.

Don’t allow a root tip to go up rather than down to the ground. And don’t let roots curl back around themselves just to stuff them into an undersized hole.

Root tip growth is partly regulated by chemicals flowing down from the tips of leafy stems to the roots.

Since gravity is involved, if you plant a root tip up and it wants down, the normal flow is interrupted not allowing the root tip to grow as strong as it could. 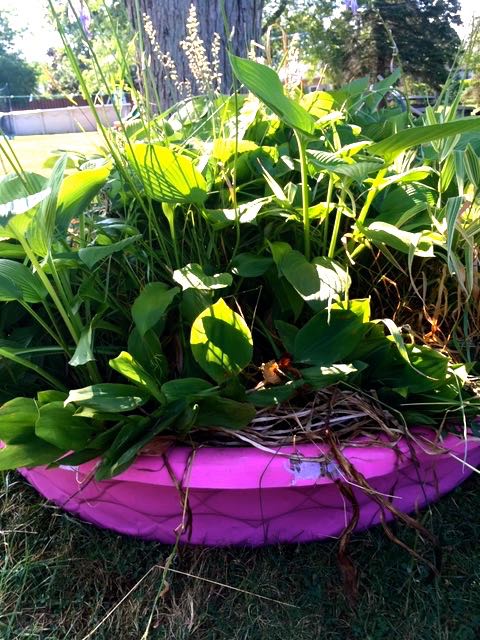 In a perfect world, 50% humidity and 50 degrees F. are the ideal conditions for holding divisions until you can get those plants back into the ground.

​This keeps those roots cool and moist.

Store them in a bucket or box in a cool, shaded place, such as a garage and cover them with newspaper to slow moisture loss.

Sprinkle water to dampen the newspaper if the roots seem dry during their “hold” time.

​If worse comes to worse, and they do dry out, just soak them in a bucket of water for an hour or so prior to transplanting.

No bucket would have been big enough for my perennials so I stole my sons pink kiddie pool. Room for all! 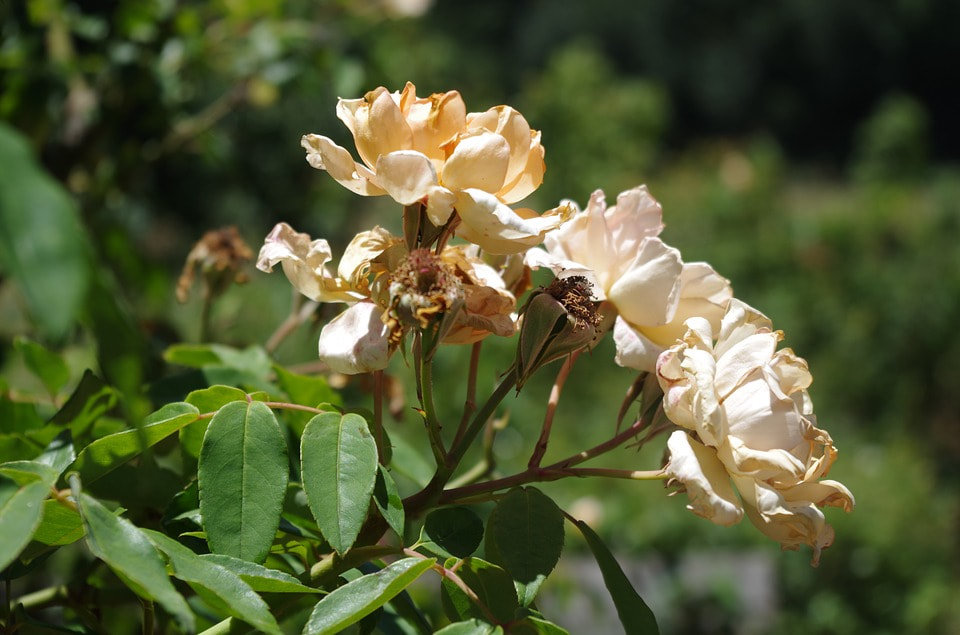 Don’t divide weakened, diseased or decrepit perennial plants. And don’t wait until a plant has become too humongous in size to divide it either.

Keep your eyes peeled for early signs of trouble: like when the center of the plant has smaller leaves, fewer flowers, and weaker blooming stalks than the outer edges.

​Or, when the plant runs out of growing room on its edges and has nowhere to go but into adjacent plants.

​Would you want to go through a major surgery if you had a massive head cold or the flu? Nope.

Your plants feel the same way. They’d rather recover their strength before being divided and moved.

​Only keep the healthiest pieces of the plant. Watch for discolored stems and eroded crowns and roots and chuck those bits into your compost bin. 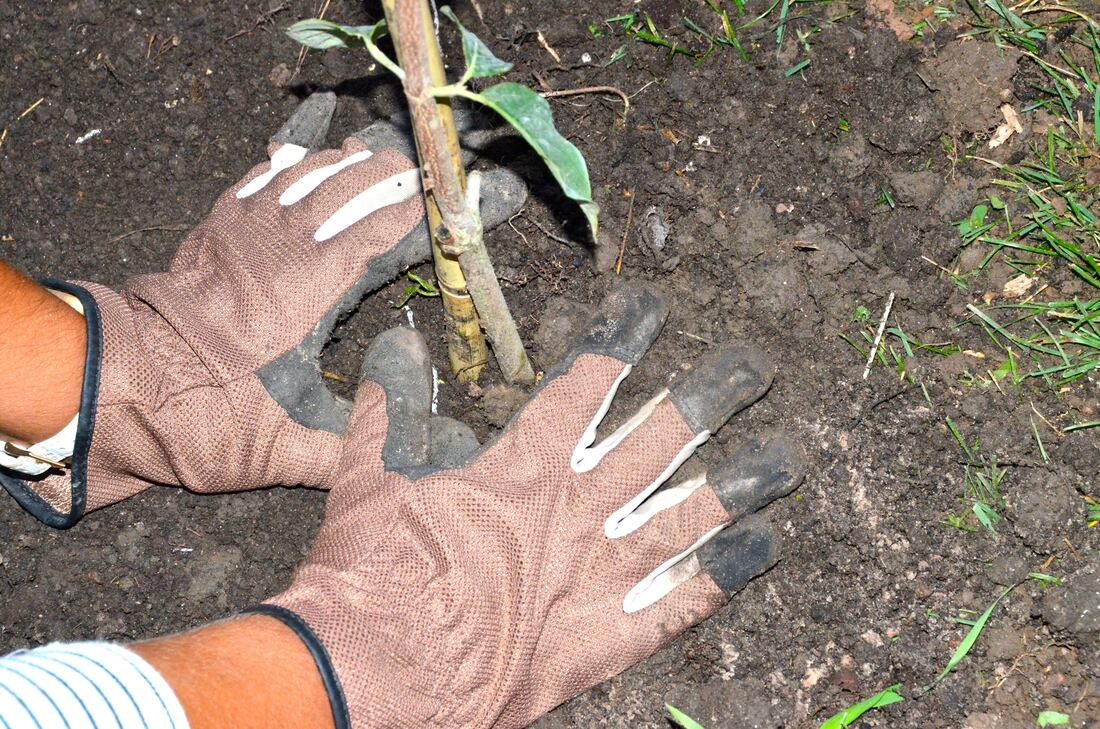 Don’t try to divide and transplant in the height of summer.

Most plants don’t want to be moved in the heat of July. But if you get a hot stretch in spring or fall lasting a few days, that’s not the time to divide and transplant either.

​Why spring or fall?

I prefer fall for transplanting over spring because the plants have more time to set new roots before winter. September is my preferred month but early October is okay, too. 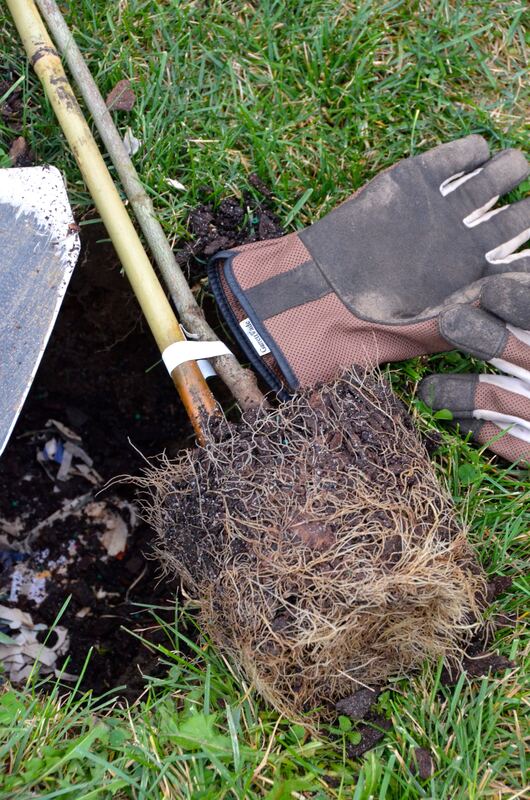 Don’t be tempted to fertilize the mother plant or her babies right away. I’m tempted too, but manage to refrain!

The fertilizer solution will likely increase the salinity of the soil and take a harsh toil on the pups. They are just not ready for fertilizer!

Wait a few weeks to a month or more before even considering to fertilize.

​Read the directions carefully on the package. Don’t over-fertilize either! That’s worse than not fertilizing at all! 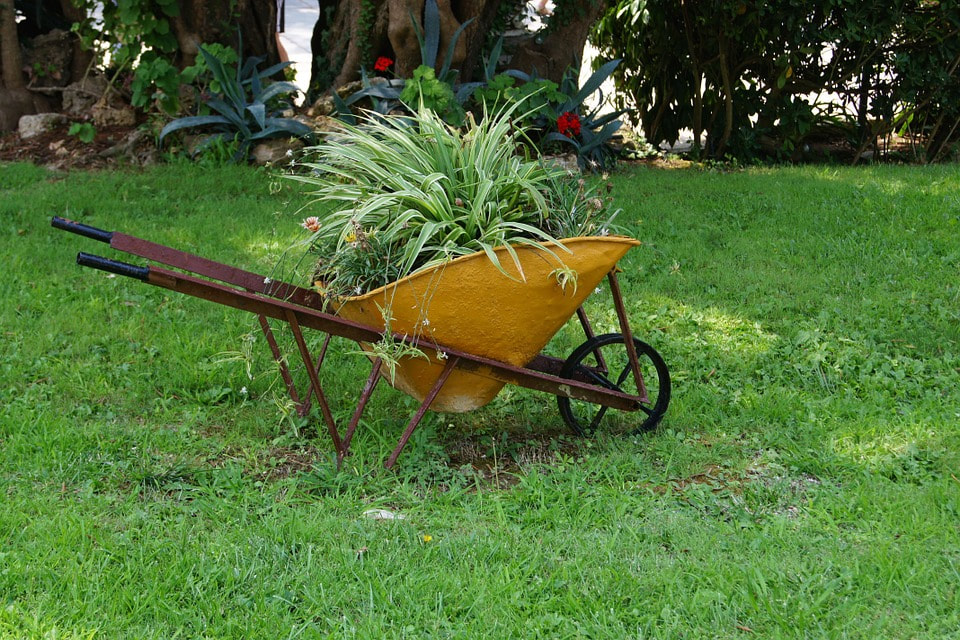 Don’t hold out on the compost even if you decide to wait a bit to add fertilizer.

This amendment  will renew the soil increasing fertility, drainage and air circulation.

You’ll even drive away a few unwanted pests!

​And I always add a handful of worm casings (worm poop!) for a big, bonus spin! 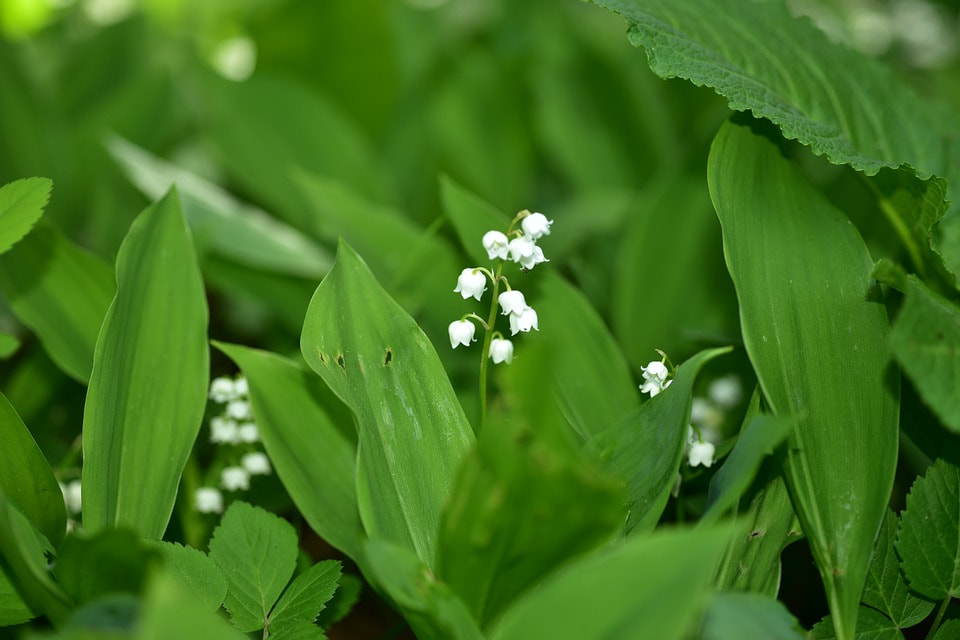 If you notice flowers forming right after division, cut them off to allow all the energy to go into forming roots.

​Focus on your roots and you’ll reap the benefits of flowers down the road. But I get it…cutting off the buds is hard!

What fall projects are you tackling right now?

Previous Post: « Boo-tify your home with the Pinecone or Gourd Desert Steel luminary!
Next Post: Kick your cat box to the curb with the self-cleaning, WiFi enabled Litter-Robot 3 connect bundle (stunning $678.99 value!) »